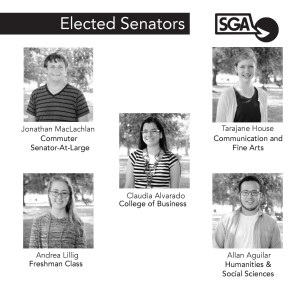 Brad Johnson, president of SGA, explained that new senators will attend weekly senate meetings where they will have the opportunity to brainstorm new projects and policies. Senators also vote on how SGA’s budget money is allocated and which new clubs are approved.

Outside of the weekly SGA senate meeting, senators form committees for specific projects and meet together. Senators are also called upon to be student representatives in faculty committees such as student development, diversity and core curriculum.

Several of the new senators spoke about their motivations for running.

“I wanted to get involved in my own department,” said Aguilar. “I am nervous but excited to help out.”

“As a senior I have heard a lot about SGA and have always wanted to get involved, but have never had the chance. This year I was very excited to see that my schedule allowed it and that I could step out into something new,” said MacLachlan.

“It’s important for everyone to have a voice when it comes to our experiences here at JBU, and I feel like I can be a good proxy for all those voices,” Lillig said.

Johnson said that the project he is most excited for this year is a scholarship fund for university students to be able to travel home for Christmas break who otherwise might not have been able to. Last year, a donor made a one-time gift towards this cause. SGA was in charge of reading through student applications and awarding the funds.

“I thought that was really cool. I’d like to see us do it again,” Johnson said. Whether SGA can find another outside donor, Johnson believes they can make it happen.

He also said SGA is brainstorming the possibility for a community closet through which students might be able to get new clothes in exchange for donating old ones. He added that any feedback from students would be helpful.