Ruby Bowles may be a new face in the international office, but she’s not new to the JBU community, having worked in the Graduate School of Business for three years.

Walking into the international office today, you’ll be greeted by Bowles’ smiling face.

Bowles graduated from Oklahoma Baptist University with a degree in political science and business. During her junior and senior year of college, she interned for Congressman Steingaurd and Congressman Borman in Washington D.C.

Bowles turned down Congressman Steingaurd’s job offer after graduation because she felt pulled towards a better way of making an impact than working in politics.

Seven years ago, Bowles’ husband Jeff received a job at the campus bookstore, and once her kids, William and Ella, started kindergarten, she began working at the Graduate School of Business.

One of Bowles’ favorite parts of working at John Brown University is talking with and listening to the wonderful stories of students. She believes that everyone has an interesting story. She admires the bravery of students, especially international students who travel long distances alone, in order to attend the university.

Bowles once met a university student who had breast cancer and had undergone chemotherapy and multiple surgeries. Last spring, she found out that this student only had a short time left to live but was nonetheless determined to finish school. She wanted to be a good example to her children and teach them to finish what they started.

This story really touched Bowles as she “prays every morning for God’s strength and to show God’s grace.” She wants to be a listening ear for students to come and talk, and she strives to be a light of God in everything that she does. 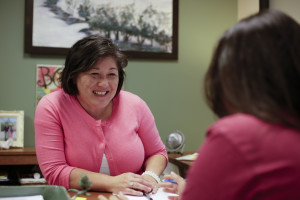 Ruby Bowles, the new administrative assistant in the International Office, welcomes students in conversation and enjoys listening to their stories.