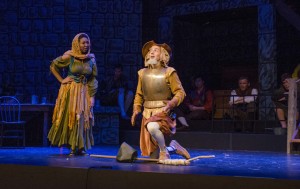 John Brown University students promise a spectacular performance this weekend with The Man of la Mancha.

Senior music education major, Steven Hamilton, will perform as the main character of the musical, Miguel de Cervantes. In an interview via email, he expressed his excitement about playing the role of Cervantes.

“The real Cervantes lived an incredible life. He saw a great deal of hardship in war as a soldier, in prison as a captive, and in his own country as a struggling playwright. However, he had an indomitable spirit that allowed him to bear up against struggles and maintain his honor and his positivity despite harsh conditions,” Hamilton said.

Senior photography major, Abi Caskey, said in an email interview that this musical will be a unique experience.

“This musical is very different than any we’ve done recently. This musical is dark but at the same time there are definite moments of beauty and humor,” Caskey said.

Caskey also said that this is the first time she is participating with a small cast.

“There are only 12 of us, which is the smallest cast I have ever had the privilege of being in, but it is stuffed with talent,” she said, “It’s extremely demanding since we have several layers to our characters, as well as playing several different characters.”

The musical will present a diversity of themes related to human nature.

“This musical explores a number of themes relating to the basic nature of humanity. Humans live in a state of depravity, and are often prone to despair. However, the show does not leave the audience in the dark. Hope, not despair, is the show’s final thought,” Hamilton said.

Something that makes The Man of la Mancha interesting is that it is a play-within-a-play.

“The audience has to follow two story lines, the prison and the story of the knight, Don Quixote,” Caskey said.

While the musical is a JBU production, it is not suitable for audiences under 12 years old.

“This play is 12+ recommended because of intense scenes and sexual innuendos,” Mariah Makil, sophomore music education major, said in a email interview.

The musical will be performed in the Berry Performing Arts Center this weekend and the next at 7:30 p.m. Tickets are available on the University’s website.