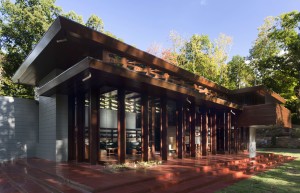 “The great thing about the Bachman-Wilson House is that it is a really strong example of the museum’s commitment to American architecture,” said McKenzie Raub, senior history major who interned at the museum.

“As a public programs intern this summer, I worked with staff to facilitate a number of architecture lectures. Most of these lectures focused on Wright, and the attendance and excitement for these lectures was incredible. People in this community really love and appreciate his work,” she said.

Wright designed several Usonian homes throughout the 30s, 40s and 50s, intending for them to be an affordable housing option amidst the Great Depression and in the post-war U.S. His designs were published in magazines for anyone to use to build their own houses. The first and perhaps most famous is the Jacobs House in Madison, Wis., and nearly 60 other Usonian houses designed by Wright can be found throughout the U.S.

In 1954, Gloria Bachman and Abraham Wilson hired Frank Lloyd Wright to design a home for them, which was constructed near a river in Millstone, N.J. An architect and design team purchased the house in 1988 and carefully renovated it multiple times. However, they determined that, in order to preserve the house, it needed to be moved from its original location because of flood concerns.

The team approached Crystal Bridges, which purchased the house in 2013. “The entire structure was then taken apart and each component was labeled, packed and loaded into two trucks provided by J.B. Hunt for transportation to the Museum,” according to Crystal Bridges’ website. 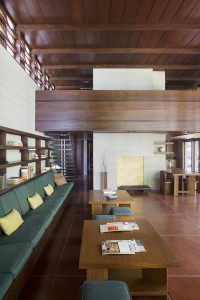 Dismantled, the Bachman-Wilson House traveled 1,235 miles to Northwest Arkansas. The pieces arrived in April 2014, and a team of museum employees, contractors, construction workers, architects and specialists set to put it back together. The house is now nestled among the trees and walking trails on the Museum grounds, just outside the south lobby.

While Raub has not yet seen the inside of the house, she is excited to explore it. “The guides that the museum has trained for the house are incredible, and a real testament to both the enthusiasm of the community and the incredible staff and volunteers at Crystal Bridges,” she said.

Admission to the Bachman-Wilson House is free; however, tickets must be reserved in advance as the house can only hold a few people at a time. Visitors may take a guided tour or explore the house on their own.