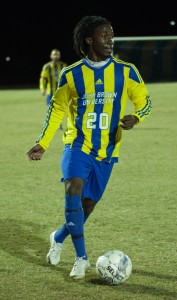 The men’s soccer team was eliminated from postseason play on Monday when Southwestern Christian University triumphed over them by a score of 2-1 in the Sooner Athletic Conference (SAC) semifinals. Midfielder Kelvin Omondi scored in the first half of regulation, but SWCU managed to tie the game at one goal apiece with less than three minutes left in regulation. The Golden Eagles then allowed a goal in the third minute of their second overtime, ending their season. 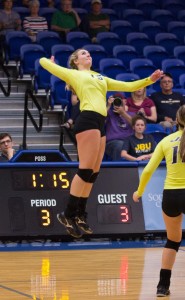 The volleyball team pulled off a sweep at Southwestern Assembly of God on Saturday, qualifying them to play in the SAC semifinals. Seniors Melissa Bakke (pictured), Libby Blasingame and Audrey Dearien all helped the Golden Eagles’ cause by notching double-digit kills in the best-out-of-five contest. 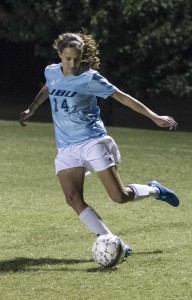 For the third straight year, the women’s soccer team will compete in the SAC championship. The Golden Eagles achieved their place in the championship on Tuesday against Oklahoma City University when forward Aspen Robinson scored with under 10 minutes left in regulation. The goal lifted her team to a 1-0 victory and eliminated OCU from the playoffs.