A green light illuminated the brick of the campus clock tower Wednesday in recognition of Verteran’s Day.

The Eagle Society, a club designed to support and serve the John Brown University’s military community, partnered with the University’s facility services to shine green lights as a part of Walmart’s campaign to “greenlight a vet.”

Students and cafeteria staff pitched in to honor veterans by writing cards and highlighting those who often go unappreciated.

“It’s a symbol of hope for veterans and it’s showing JBU’s support for them,” Zoe Shafer, president of The Eagle Society, said.

A sign stationed by the clock tower reads, “Our nation’s veterans are everywhere. We are shining this green light to show them our support and give them hope in their lives. Show your support for our veterans by shining a green light in your window.”

Walmart’s Greenlight A Vet campaign advertisement says that veterans are camouflaged as average civilians when they are out of uniform, but “even if we can’t see them, they should always be able to see our support.”

As diners exited the cafeteria, they could write a card to a veteran expressing their gratitude. Medina said she is pleased with the outcome, as she saw students, faculty, staff and even children participating and creating more than enough cards for each of the residents in the home to have one.

“We got to meet and hear stories about so many interesting people. We met the guy who invented cell phone towers, a guy who was in the army rangers who was part of the very first unit to storm the beaches of Normandy and a lady who was a nurse 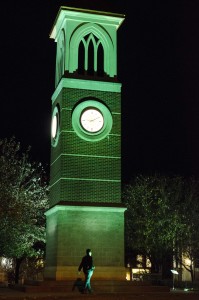 in the army and her husband was a doctor in the army,” Medina said about her visit with dining staff to deliver cards at the Arkansas State Veterans’ Home. “Lots of the residents don’t have family locally or don’t have any visitors so we were happy to spend our entire morning there with them.”

“Ever since my brother joined the Norwegian Air Force, I have been more grateful and impressed by the men and women who risk everything to protect their country. Although my card was small, short and seemingly insignificant, it was a way to show my gratitude for their courage and dedication,” Eryn Matland, junior biology major, said.

“I know Veteran’s Day isn’t one of those holidays that’s widely celebrated, but I think it should be, because, you know, if they weren’t here, fighting for our country and our freedom, where would our country be?” Medina said.