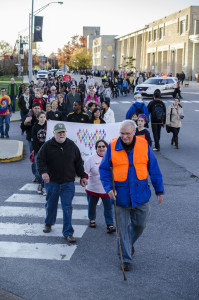 COLUMBIA, MO. –
Under cloudy skies and a brisk wind, community members, faculty and students participated in a Peace Walk to show their support for the students at the University of Missouri.

In Peace Park, on the edge of Mizzou’s campus, about 300 walkers gathered in support on Sunday, Nov. 15. Among the predominantly white crowd were families with children and pets, pastors, LGBT supporters, parents and students with hands wrapped around Starbucks cups. A few carried signs, and others wore shirts that read “Black Studies Matter.” They huddled together, casually sharing their stories where, just days before, protesters had marched, chanted and sung songs to express their frustration with the racism on the University of Missouri campus.

“We believe the students did an amazing thing, and this is our way of supporting them and encouraging the conversation,” said Angela Speck, chair of the Diversity Enhancement Community and a professor of chemistry and astronomy at Mizzou.

Speck helped coordinate the Peace Walk at Mizzou. She wanted to involve the faculty and community in the conversation of race and what was happening on the campus.

“One of the issues that the students pointed out was the need for an increase in diversity among the curriculum. This is something the faculty can do,” Speck said.

Mizzou student Anna Wright said,“It’s been a pretty crazy week. There have been a lot of injustices happening on our campus, and I don’t think we’re unique in that. I think that it’s a problem on every single college campus across the country, and it’s a good thing that we have student activists who are speaking out against this problem.” 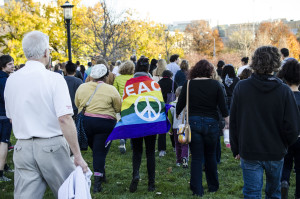 While John Brown University students have not participated in solidarity walks or demonstrations with Mizzou, the school is committed “to diversity and  inclusiveness…based on the person and work of Jesus Christ which fulfills the covenant that God made with Abraham…” according to the University.

Hannah Shaffer, junior illustration major, hopes that Mizzou and other schools dealing with issues of racism on campus can make changes.

“I think progress is being made, and I hope a solution can be found quickly for the sake of the students,” Shaffer said.

“This semester University students have had several opportunities to participate in conversations about the effects of racism and how Christians should engage the topic and work to create more inclusive communities,” Marquita Smith, associate professor and chair of the diversity committee at John Brown, said.

Salina Adolph, senior and MOSAIC vice president said, “The students at Mizzou aren’t protesting without a reason. They’re just asking to be heard.” 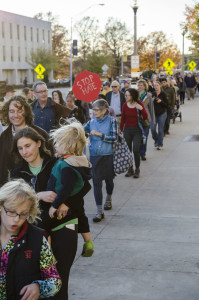 Missouri’s flagship university, which enrolls more than 35,000 students—7 percent of which are Black—has been in a racial uproar, with Black students accusing the university’s administration of handling racial problems on campus with negligence. The issues ranged from being called the n-word to general mistreatment on campus of them and faculty of color.

When the president of the university system, Tim Wolfe, refused to acknowledge the students’ issues, the organization, Concerned Student 1950, petitioned for his resignation. After multiple protests, it was graduate student Jonathan Butler’s hunger strike that pushed Wolfe to resign and Chancellor Loftin to take a lower position.

The Concerned Student 1950 group at Mizzou submitted a list of demands to the university that would enhance the inclusiveness of minorities on campus.

“There are so many people who want to help, but they have never been activists before. This walk is a way for faculty and the community to express their solidarity during this time,” Speck said.

While Speck intended for the walk to be for the faculty, she was excited when several community members and alumni joined them.

Bob Stewart, a Mizzou alum who serves as a local pastor in Columbia, participated in the peace walk. 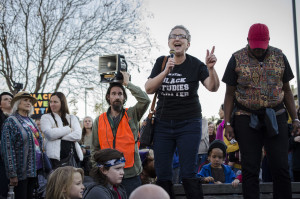 “I came to the walk today because of all the events that have been happening lately, and to
become more informed on the issue,” Stewart said.

Stewart recalled attending classes when the campus and community was still segregated.

“I did not notice as much, but my friends from Chicago were very aware of the racial tensions. I remember them coming to me and sharing their experiences on campus that shocked them,” Stewart said.

Rebecca Graves, the librarian at Mizzou, said she was impressed with the bravery of the students who protested. She said their protesting shed light on racial issues on campus that she did not know existed, and the stories of her colleagues being mistreated and discriminated against horrified her.

“I am here to support the students, because I am proud and amazed at what they have done. This walk is an opportunity for us to do something positive.”

As the protesters walked through the campus chanting songs, they carried Black Lives Matter posters and wore shirts reading ‘Black Studies Matter.’ At the end of the peaceful demonstration, the group gathered at the Black Cultural Center where the coordinators of the event ended by charging the protesters to continue to give voice to issues of race discrimination and injustices.

News of the protests spread among higher education institutions. Universities began showing their support by embracing the hashtag #WeStandbyMizzou. The University of Arkansas in Little Rock responded by holding a Blackout event, where students dressed in black and prayed in solidarity for Mizzou.

“Mizzou has become a beacon for other universities in so many ways. Many times as  minorities on predominately white campuses we see issues, and we endure difficulties, but very rarely do we stand up and fight effectively and get the results that we desire,” said Kristen Smith, who is the president of Profound, an organization that promotes the studies
of the liberal arts for minorities at University of Arkansas in Little Rock.