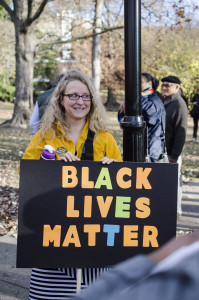 Wow, the scenery at University of Missouri is beautiful! Their buildings reach to the sky with traditional red brick lining the sides of massive walls. The beauty of this place is antique, vintage or something from an earlier America. They have a late 17th century cathedral anchored between two of the three or four student centers. All the grass is cut in the same direction with the same length. The bright green of the grass is contrasted with the gray stone buildings that sit on top of it.

The students are walking politely on the pavement, smiling and meeting each other’s light colored eyes. The sunlight is dancing on their faces as they stroll to class in the student center, into the university’s mall of a bookstore. It is actually quite hard to believe on such a peaceful campus, students of color were carelessly called the N-word and silenced like children.

Being able to visit Mizzou during this transformative time of their history was nothing less than powerful. I identify with what the students of color are struggling to accomplish on their campus, because though the Mizzou is bigger than John Brown University by population, JBU and Mizzou have the same demographics. Each have a predominately white student body with a minority that is formed by African Americans and Hispanics. 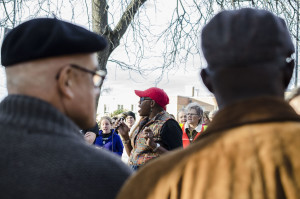 Mizzou is an encouragement that change can happen when we speak up. When we break our uncomfortable silence and stand up for our right to be treated as any other student. We deserve for administrations to listen our issues with a genuine ear and respond to them with deliberate action.

The only thing that separates JBU from Mizzou is population size.

I stand by the students of Mizzou and their choice to protest and charge their school to be better. I am proud to see students of color pushing against the racial tensions that are prevalent on predominately white campuses by throwing a grenade through their silence.
I pray that I and other students of color, who are in this same narrative, will not be afraid to do what is necessary to make their community more inclusive and accepting to all races. Even if it means going on a hunger strike.

Watts is a senior majoring in English. She can be reached at WattsB@jbu.edu.