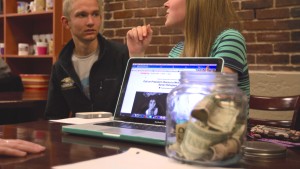 The recent response on campus to the Syrian refugee crisis has inspired increased activism through fundraising and the possibility of a spring trip to help refugees in the United States.

Two events helped to increase awareness for the crisis: Stories from Syria, which gave an overview of the crisis, and a special offering in chapel for World Vision to help Syrian  refugees.

Following World Awareness Week, more is being done to help the growing crisis in Europe, the Middle East and America.

On the Monday and Tuesday following World Awareness Week, there was a bake sale in Walker Student Center. And on Nov. 14 Songs for Syria was held at Cafe on Broadway to
raise support for Syria.

The proceeds of these two events also went to the World Vision collection.

World Vision will use these funds to provide food, medical care, emergency supplies and clean water to refugees in Lebanon, Jordan, Iraq, Syria and Serbia, according to their website.

The events were set in motion by the involvement of students on campus.

Melissa Hall’s Family Law class organized Stories for Syria and the bake sale. Awareness and advocacy continues to grow through these events and a Prayer series which took place on Nov. 15 in Walker.

Students from this class also promoted a petition to help people contact their congress and the president, asking them to honor the plan and allow the 100,000 refugees into the United States.

Leah Guy, who helped organize some of the Syrian support events, said that at least 250 people contacted their government officials.

Frank Huebert, director of service and outreach ministries, praised Hall’s class for increasing awareness around campus on this topic.

“Here’s a group of 20 people who are putting some energy behind raising awareness,” Huebert said. “I would say before the last two or three weeks, I’ve heard JBU students talking about Syria, and I’ve heard some responses here and there, but as this class came on board, you really start to hear people say, ‘Oh, okay, yeah, I’ll take some time to really think about this and educate myself.’”

Though faculty and students are encouraged by the increased education on campus, there is still the feeling that there is more to do.

“John Brown is not a particularly activist oriented campus. One of the reasons that I’m
really encouraged by this response is that I feel that we have room to grow in this area of being more aware and involved in the world’s issues,” Reed said. “I’m encouraged and I feel there’s more that could and should be done.”

Frank Huebert is exploring the possibility of organizing a short term mission trip over spring break next year. He does not yet know definitively where the trip will be going, but
it is likely that students will be ministering to the refugee populations in either Dallas, Texas or Atlanta, Georgia.

Huebert is still looking for faculty members willing to lead the trip, but he said he feels certain that the trip will end up happening.

“We’re following up on some leads, particularly with JBU alumni working in that field. Right now, one of the key things we’re waiting is an invitation from one of these existing refugee organizations stateside,” Huebert said.