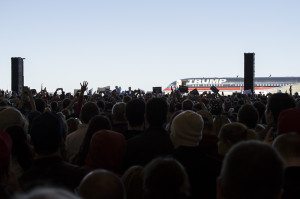 In front of a crowd of 5,000, Donald Trump landed his plane and spoke at a rally in  Bentonville this past Sunday.

Several John Brown University students and alumni attended the rally to hear what the Republican candidate had to say.

“Trump discussed policy, plans for international trade, keeping businesses in America and border security,” according to arkansasmatters.com, yet students received a different message.

Senior John Lauderdale had the opportunity to attend a rally for Bernie Sanders a few days prior and attended Trump’s rally as well with expectations for him to address big issues.

“The rally was little more than a platform for Mr. Trump to ramble and rant about his recent dealings with Marco Rubio as well as attacking many other candidates and corporations he’s had dealings with in the past,” Lauderdale said. “It felt like a high school kid talking smack at the lunch table with a group of friends, with various laughs and reactions from the crowd.”

Lauderdale had negative opinions of Trump before the rally. “Through his rally, my already
negative opinion became more negative, which I wasn’t sure was possible.”

Anna Andrus, University alumni, said she had a poor opinion of Trump long before he decided to run for president; her initial impression of him was largely formed by comedians rather than a personal perception.

After attending the rally, Andrus said, “I can now confidently assert that I find Trump to be an egomaniacal windbag with wildly inconsistent policies.” 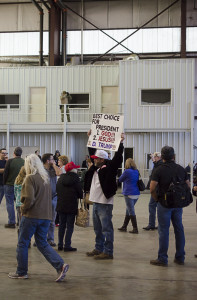 Andrus stayed for a portion of his speech in Bentonville and observed the crowd there. “The people we met all seemed pleasant and excited to be there,” Andrus said. “Probably the most memorable person was a man carrying a poster that read, ‘Choices for President: 1st: God, 2nd: Jesus, 3rd: Donald Trump.’ I was tempted to ask him why the Holy Spirit didn’t make the cut, but I refrained.”

Lee said Trump proved his immaturity throughout his speech in Bentonville and spent the majority of the time berating the other candidates.

Lee believes Trump supporters feel a need for a confident and strong leader, and he believes that the public is drawn to that energy.

Yet, Lauderdale said that throughout the media, Trump is portrayed as a bigot, a racist and a sexist. “Through Trump’s statements, I’d come to agree with these titles he’s been given, and going into the rally I knew it was going to be somewhat offensive,” he said.

Lee’s opinion was similar. “All Trump had were jokes and degrading comments of other candidates. Trump is a clown.”

On Super Tuesday, Trump won the majority of delegates in the state of Arkansas by 33 percent.

Students across campus advocated for others to go to the polls and vote. Andrew Heldenbrand, sophomore international business and intercultural studies major, voted on Tuesday.

“It was probably the easiest government experience of my life,” he said.

Heldenbrand said, “I voted for Rubio, because I don’t want Trump or Cruz [to win]. I’ll  probably vote Democratic later though.”