When the National Football League officially made salary caps part of their organization in 1994, each team started out with a humble $36 million to spend on their players. That number has since quadrupled to the current salary cap for the 2016 season of $155.27 million.

For those who are unaware of what a salary cap is, you’re not alone—I once had no clue what it meant. A salary cap is the maximum amount of money that a team can collectively pay the players on their roster. The goal of a salary cap is to limit the spending that teams choose to pay players and to keep the teams as equally balanced with talent as possible.

Since all 32 teams in the NFL each have a $155.27 million salary cap to spend on players, the NFL spends nearly $5 billion on players alone. This is not even counting the salaries of all the coaches that stand on the sidelines, the trainers and doctors who help keep the players healthy and all the other front office jobs that are part of the league.

There are 53 players on each NFL team, and each team is allowed a five-player practice squad. This means there are 1,696 players and potentially an additional 160 practice players, totaling a maximum players of 1,856 players in the NFL.

The NFL has all of Sunday dedicated to itself and is the most profitable professional sports industry. It is clearly a monopoly and the money just keeps coming in. The whole world seems to stop what they’re doing one day out of the year just to watch the Super Bowl. It seems puzzling that the NFL would need to add $12 million more to the salary cap for next season.

If we weigh the pros and cons of this move by the NFL, the cons would easily outweigh the pros. The athletes subject themselves to physical beatings as a means to make a living. Football players are some of the toughest humans on the planet and could be considered modern day gladiators. Although they are not fighting wild beasts in the Coliseum, they are pretty beastly in their physique and compete in coliseums.

All humor aside, these athletes often play through severe injuries just to make a paycheck. I understand that the NFL wants to reward these players for their talents and toughness with higher salaries, but it would be more rewarding for them to receive more medical attention and benefits once they retire from the game.

The players who receive the majority of the benefit of the increased salary cap are the superstars who receive the maximum contract offers. If the NFL was thinking about the needs of the players rather than its own wants, it would ensure that all of the players who retire from the NFL have the proper medical attention. It only seems right to provide that necessity for the ones who are sacrificing their physical health for the profit of the NFL as an organization and the pleasure of the fans. 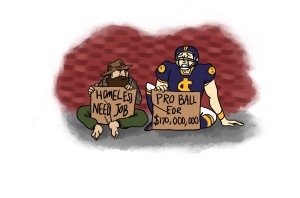 Luke Moyer is a senior majoring in communication. He can be reached at MoyerS@jbu.edu.