The Golden Eagles’ 2016 season opened with both the men’s and women’s teams competing against Hendrix in Conway, Ark. Both teams lost by a score of 7-2. Today, the Golden Eagles are returning to Conway in hopes of a different outcome.

A victory against Hendrix would be a first for every member on the team. Claire Griffin, sophomore tennis player on the women’s team, mentioned that the Warriors are a team the Golden Eagles have improved against over time.

“We’ve gotten closer each time, but we have to work on our consistency and just getting better,” Griffin said.

Colton Cheek, senior tennis player on the men’s team, said that the team’s loss was partially attributed to it being the first match of the entire season. He also said that his team had yet to really get used to playing in a game setting.

“Practicing is one thing, but really getting into that match play feel and trying to control the emotions and trying to keep everything in check is hard,” Cheek said. “A lot of guys fought really hard. I thought everyone in the lineup played really well and put a lot of time into it.” 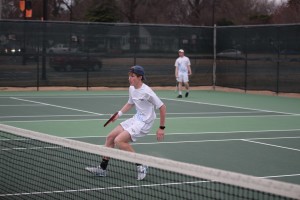 The matches were structured into two different sections of play for each game. Each game, which was played in best-offensive fashion, began with three rounds of doubles followed by six rounds of singles. Taylor Russell, junior tennis player on the women’s team, pointed out that one of the reasons for her team’s defeat was that they had not gotten used to their new doubles partners.

“We have much better chemistry and will be able to gel much better together in the next match,” Russell said, referencing the Golden Eagles’ new doubles pairs.

Cheek expressed that the doubles matches are crucial to the team’s success because they can get momentum going for the singles matches later in the game.

“It takes a lot of stress off the guys in singles,” Cheek said about the doubles matches. “If we come out really quick in doubles, we’ll have a better chance of winning in singles and hopefully come out with some wins.”

To prepare for the matches, the Golden Eagles have been spending much of their time volleying out at the courts. Griffin said that the nice weather has allowed for both teams to practice outside.

“We’ve been able to be outside on the courts more,” Griffin said. “The team has made a lot of progress since then.”

The team is confident in the strides they have made and looks to capitalize on their progress against Hendrix. Griffin said that her team plans on taking what they know about their opponent and putting it to use.

“[Since] we’ve already played them, we already kind of know some of their strategies and weaknesses,” Griffin said. “We can use that against them in the upcoming match.”