Photographer and journalism alumus, Ben Rasmussen is displaying his documentation of the Syrian refugee crisis at his alma mater.

Rasmussen’s work currently fills the walls of John Brown University’s art gallery in the Windgate Visual Arts West building. His collection, titled “By The Olive Trees,” documents the struggle of Syrian refugees in their efforts to relocate in wake of the genocide that currently plagues their homeland.

John Brown University’s faculty began taking an interest in Rasmussen’s work after he received the Young Eagle Award in October for his photography for Time Magazine, Wired and other nationally acclaimed publications.

They invited Rasmussen to display his work after Charles Peer, director of the University’s art gallery, noticed that there was a gallery show opening at the end of the 2015-2016 school year.

“Usually, it is booked a year and a half ahead, but I had this one slot left for exactly the right show,” Peer said of the University’s art gallery. “I started looking at [Rasmussen’s] collections. I reached out to him and asked if he was interested. He was, in fact, very interested.”

The gallery officially opened April 5. At its grand opening, Rasmussen himself gave a speech about his work. Before his speech, he mentioned that the purpose of the gallery was to let viewers experience, at least in a limited sense, the lives and struggles of those often not taken into consideration.

“The ultimate goal with all of my work is to give people a chance to empathize with those who are really different from them—those who are disconnected with them geographically, socially, economically and politically,” Rasmussen said.

Rasmussen and photographer Mike Friberg were commissioned by New Republic magazine to travel to Jordan and document the Syrian refugee crisis in 2013—two years into the Syrian civil war and during the rise of ISIS.

Among the places he documented was Za’atari refugee camp, near the city of Marfaq. His pictures, often accompanied by the testimonies of the subjects, depict the everyday struggles of refugees, such as cramming onto a crowded bus through the vehicle’s windows or living in condensed quarters in the middle of a desert.

“We hear stories, but we don’t like putting faces to them because it makes it more real,” Ashton Rail, photography major, said. “That’s what his whole exhibit is about.”

Peer said that the gallery has been received well by those who have viewed it. He said that Rasmussen has done an excellent job of painting an accurate picture of the refugees’ struggle with his camera and interviews.

“All of these things really start to put meaning to what we hear on the news but just kind of dismiss,” Peer said of Rasmussen’s work.

Rasmussen said that of all the places he could have displayed his work, he is especially happy to be able to display it on a college campus. He said that the college demographic gives him a chance to influence a demographic of young thinkers.

“You have access to this population of people that is young, engaged and thinking,” Rasmussen said. “Their worldviews are being built. To be able to have conversations with people who are in that mindset is really good for me.” 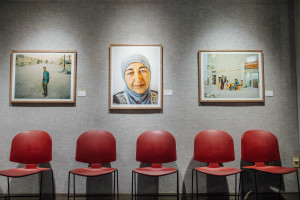