The British comedy “All Toffs and Buffoonery,” a mix of humorous scenes from plays and musicals, will be performed this Friday and Saturday. 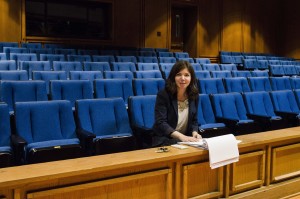 This performance is the final project for Music and Theatre Spring Scenes, an acting and performance class taught by Liesl Dromi.

Scenes performed will be from plays such as “Blithe Spirit,” by Noël Coward, “Pygmalion” by George Bernard Shaw and “An Ideal Husband” by Oscar Wilde, with musical pieces sprinkled in as well.

“It’s a nice sampling of scenes,” Dromi said, citing the diversity of roles as one reason the class is fun. “Students get to experiment in ways they might not get to in a full production.”

This semester 10 students have been working to prepare for their performance. The smaller cast size means actors are able to take on different or bigger roles than they might in the spring play or fall musical.

Elise Collingsworth, sophomore worship arts major who is currently in the class, said it’s been a great experience. While the class has pushed her out of her comfort zone and has been a lot of hard work, Collingsworth said it has been “fun to see how the cast bonded and struggled together.”

“I love the moments where everyone finds something funny and we all just die laughing,” Collingsworth  said.

This year, the cast shot three short films to introduce the different segments of the show. Dromi said that for many of the students and herself, it was the first time ever to act in or shoot a film.

Dromi laughed as she shared a favorite memory from working with the cast this semester. “Everyone did their own hair and makeup and it was a lot of fun. They’re really funny films,” Dromi said.

Nephtali Cantu, junior music education major, was in the class last spring and took part in the production “Fun-sized Shakespeare.”

“It’s a great experience,” Cantu said, adding that getting laughs from the audience was really satisfying. “It all really comes together in the last week,” Cantu said. He encourages University students to go see this year’s production. “It’s a different experience than the big productions in the BPAC. It’s a lot more intimate, because you’re five feet away from the actors, and we go into the aisles and stuff as well.”

“They’re good kids,” Dromi said of the students in the class. “People should come support them.”

Collingsworth also said this is a performance worth seeing, full of “really funny scenes” and a talented cast.