When the players of the golf team walk off the course after their last match this Tuesday, they will also be saying farewell to their team members. 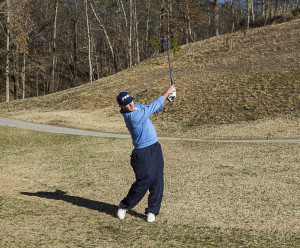 “I do not know all the reasons, but administration and the athletic director made a tough decision that they felt was in the best interests of John Brown and the John Brown Athletic department,” Doug Turner, who has been the golf coach since January 2013, said.

Turner explained that it was hard trying to find a part time coach that could handle everything that was required to keep the team afloat. Such responsibilities include recruiting, scheduling practices and finding the right tournaments for the team to attend.

Another major issue that the school had was the proximity of good practice facilities. The team had permission to play at both Shadow Valley Country Club in Rogers and Flint Ridge in Kansas, Okla. These  facilities were 45 and 25 minutes away, which was a challenge because it was difficult for the players to practice or play before the sun went down. The local golf course in Siloam Springs did not allow the team to play without charging them.

“It was really difficult to justify given their course conditions and the amount they wanted to charge,” Turner said. “I was in favor of keeping the team and trying to build on the improvements that have been made, but understand that the challenges seemed too great to overcome.”

Robert Raborn, senior golfer, mentioned that it was very difficult for his team to recruit players. He said that it is disappointing that the team is ending.

“Thankfully the school has graciously offered to honor the scholarships to anyone who has golf eligibility left until they graduate,” Raborn said.

At the match, Gordon shot in the 80’s during a couple of rounds.

Raborn said that he did not do well at the Invitational.

“I struggled some putting, got some bad breaks and hit my driver very poorly the second day. The team didn’t fair too well, but I think we are getting close.”

Raborn did not have one particular favorite memory about being on the team.

“I enjoyed the times that we played well and the times that we had fun,” Raborn said. “For me it’s just being around the guys. Whether it be in the van or the hotel room, or even out on the course rooting each other on, it’s more about the camaraderie and having a common goal with other people that I have enjoyed the most.”