As most people know, I am an avid Republican. Because of this, I attended the Marco Rubio rally in Rogers on Feb. 27. While I was there, he spoke about police and veterans. This should be an issue that goes far beyond our political identity. These men dedicate their lives to the service of others. They serve not only our country, they also serve us.

All too often we hear of tragic instances where a police officer acts on some sort of prejudice and a crime is committed at the hand of law enforcement. Right now, our nation is calling for reformation. How should a Christian react to all these protests? Paul calls for Christians to submit themselves to authority. It is important to remember that it is not the system, but the individuals, who are flawed. Christians should pray for these people. Being a police officer is not a glamorous job. It is a life of service that does not receive much thanks.

Mel Mathis, a sophomore political science major from the University of Arkansas who stood next to me was moved to tears during the rally. After, she explained, “When Rubio commended those who work as police offi cers, it really resonated with me because my father was a police offi cer in Los Angeles before becoming a fireman. It’s hard to watch the media discredit law enforcement because they allow a few bad cases to tarnish the reputation of the police force. People undermine the sacrifices and risks taken by these men and women, and I really appreciate that Rubio gives credit where credit is due in this regard.” 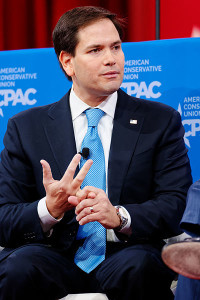 It has become the new fad for people in high places to look down on law enforcement and to blame them for the social issues that the American people are facing today. These issues have not risen from a police officer
using unnecessary force. If there is in fact a problem, then it must be coming from the people.

Law enforcement is not a breed of people. They are ordinary people that work an ordinary job in order to keep their community safe. If a police officer is blamed for a problem, then it is his personal problem and not a problem that represents the law enforcement as a whole.

The Christian community carries a lot of weight in this fight. It is important to know that the world’s eyes are on you. John Brown University needs to lead the country by thanking the people who serve us. JBU needs to not only thank them, but also to show them respect for what they do and the position that God has given people.

Minner is a sophomore engineering major. He can be reached at MinnerM@jbu.edu.