Expectation is building around the John Brown University tennis teams as they prepare to play their second and final home match of the season against Southwestern Christian University on Monday, April 18 at 2  p.m.

With only one previous home game played this season, the Golden Eagles are anxious to be back in front of familiar faces.

“I’m excited,” Grace Cusick, sophomore on the women’s team, said. “I like having the support of all of my friends coming out to watch [the match]. I like being on our home turf and having people watch what we can do because we don’t get to do that very often.” 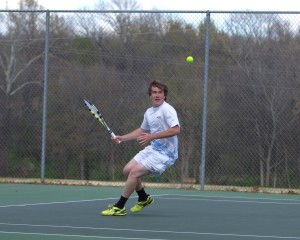 women’s team. Because the University is the only team in the Sooner Athletic Conference that has such a commodity, the Golden Eagles have to schedule games with anyone and everyone who is willing to play them in the area, including National Collegiate Athletic Association Division II schools, Harding University and Oklahoma Baptist University.

The Golden Eagles were swept in all three matches against NCAA Division II competition, but the resolve in the players’ attitudes seemed to tell a different story.

“[Playing against high competition] makes our record look pretty bad,” Cusick said. “Going into [the match], we know we’re the underdog. That mindset has been more helpful than I thought it would be because when we play teams that are just as good as us or a little better, we know we can step up.”

While it has been a season of difficulties, the team’s development has not been hindered. Kamal Fulghem, sophomore on the men’s team, recounts the great strides the team has made since last season.

“When we faced Harding, although they beat us pretty handily, it was the greatest joy of the season thus far because it showed that we could hang with high level competition and it proved that we’ve come a long way since last year,” Fulghem said.

The athletes agreed that the greatest challenge in the sport is to avoid beating yourself in the match and being dejected by the errors made. In an individualistic and often lonely sport, Krizana Saucedo, senior on the women’s team, was grateful for the team dynamic among the players.

“When you come to the college level, [tennis] switches from an individual sport to a team sport,” Saucedo said. “When you do well, you keep moving on as a team, rather than as an individual. Your work still counts, but it’s no longer just for you but for the school and team.”

As playoffs are quickly approaching, both the men’s and women’s teams have high hopes to snag as many wins and valuable experience as possible in order to succeed at the regional tournament. Their final home match is this Monday at 2 p.m.