Uniting cultures is a difficult task, however, it is not impossible for Las Delicias.

Las Delicias is a Hispanic restaurant in Siloam Springs, Ark. The owner, Teresa Aquino, founded it in 2007.

“When we came to Siloam Springs we realized that something was missing,” Luis Barajas, baker and cook, said. “This is how the idea of the restaurant came to our minds.”

Barajas, who has been working since the foundation of the restaurant, has seen how the business has grown over time. During the seven years of service, Las Delicias has been in three locations.

Their first location was Main Street Downtown. They then moved to S. Lincoln St. and then made a decision to move one last time.

“Originally we planned to make it bigger, but it’s a lot of work,” Barajas said.

Finally, Aquino and Barajas said they have found their permanent residence on 935 W. Tulsa Street. Michael Aquino, son of the owner and cashier, said working at Las Delicias is a wonderful experience because he has the opportunity to be exposed to different cultures.

“We serve a rainbow of people,” Aquino said. “We have Guatemalan, Mexican, Salvadorian and American customers.”

David Flores, a Salvadorian customer, has been a regular since 2013. He said that he likes the food because it is authentic and accessible. 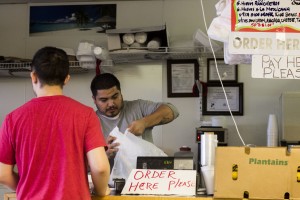 “Sometimes I come before going to work or after,” Flores said. “My favorite dishes are tacos de res and caldo de patas.”

Joe Walenciak, dean of the Soderquist college of business, is a frequent customer of Las Delicias. He is  known for buying over 100 tamales for his gateway class at the University.

“When I need tamales she is the one I call,” Walenciak said. “She always takes care of me. They don’t ever ask for money upfront, they trust me. I appreciate that.”

Marcus Ciccarello, senior international business major, went to Las Delicias for the first time last semester. Having traveled to El Salvador in his past, he was interested in trying pupusas in Siloam.

“I went there six times in the span of two weeks,” Ciccarello admitted, “I shouldn’t spend as money as much as I do there!”

Ciccarello recommended the pupusas and breakfast burritos and said he was amused at the fact that people are able to watch Netflix while they eat at the restaurant.

“It’s one of those places where you go there just for the food, it’s not flashy and has an authentic feel,” he said.

Ciccarello observed that on the menu there are items from various Latin American countries. Ciccarello’s friend and fellow Las Delicias enthusiast Caleb Taylor said, “I can’t stop eating their pupusas, they’re so good!”

“Honestly, more people should appreciate Las Delicias…it’s a little cheaper than the other places for more quantity,” he added.

Taylor noted that he enjoys the tall cokes, proximity to campus and said he shares about them as much as he possibly can.

Jorge Ramos, cook at Las Delicias, describes the restaurant as a family-friendly environment and a place where people can spend time and enjoy good food.

“I like their food more than the other places in town, and something about Las Delicias is just better,” Ciccarello said.