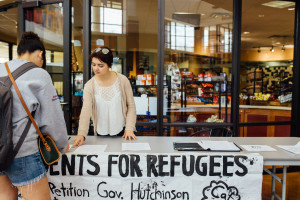 Respecting authority and demanding reform are not mutually exclusive.

In chapel a couple of weeks ago, Asa Hutchinson, the governor of Arkansas, came and spoke to the student body. During that chapel, I helped lead over 100 students in wearing white shirts—many of which said “students for refugees”—to protest Governor Hutchinson’s opposition to the relocation of Syrian refugees in the state of Arkansas. Before the protest, I was told by faculty that some students had expressed concern that what we were doing was disrespectful and that it shouldn’t be done. While I can understand where these comments come from, I disagree with them entirely.

When one calls for civil reform, it is almost always—to a degree—piercing. It is dealing with controversial policies and ideals that affect the lives of many people. Oftentimes, calling for civil reform is, as was the case in chapel two weeks ago, calling out a government offi cial for a particular stance or law. And, while we did protest respectfully, it was not necessarily “nice” by many people’s defi nition of the word.

However, as I said, these policies and ideals affect the lives of many people. I am not calling everyone to believe the same as me, but when entire demographics of people are affected by laws and practices that are carried out, we as Christians are called to care. I saw that Syrian refugees are individuals who are, in this case, neglected by our lawmakers. Other students and I felt called to take action in order to be a catalyst for change.

We as citizens [and furthermore, as Christians] should always respect governing authority—they are who God has placed as the caretakers of our society. But within that respectful approach, we also must acknowledge that government, like everything in this world, is imperfect. Because of this truth, we must push for reform.

There is a difference between attacking authority hatefully and respectfully critiquing it so that it might be better. This nation’s police force, for example, must be respected, for they are the protectors of our society. Their job is absent of praise and is also our most dangerous domestic profession. To not acknowledge the sacrifices that police officers make on a daily basis is to not give credit where it’s due.

However, we must also be willing to openly address flaws in such an authoritative organization. To ignore that our legal system dismisses 96 percent of civil rights complaints filed about police officers [Pittsburgh Tribune-Review], that unarmed black men are seven times more likely to die from police gunfire than unarmed white men [Washington Post] and that blacks and Hispanics comprise 58 percent of all of our country’s incarcerations in spite of comprising only one quarter of the population [NAACP] is irresponsible on our part. If we hold the police force on a pedestal for being our protectors while ignoring the fact that minorities are still enduring institutional racism through profiling, police brutality and a lopsided legal system, we are using passive “respect” as an excuse to avoid actively fighting for justice.

We as Christians must unapologetically call out injustice and demand reform, even if that injustice is found within government authority. Rosa Parks, William Wilberforce and Martin Luther King, Jr. are prime examples of Christian leaders who recognized flaws in the system and respectfully challenged the law so that the voiceless could have a voice. These great leaders understood that if we do not actively address injustice, we are not promoting virtues of love, peace and integrity in society. We as Christians must understand this concept and act on it as well.

It is our job to use a Christ-centered approach to activism—one that is done out of compassion for those who are suffering and is also not afraid to respectfully stand up to those in power. Acting in this way is not always “nice,” but it is indeed just. Christian activism is almost never easy, but if we are able to go forth and challenge the status quo in the name of Christ, we are not only changing the world for the better but also furthering His kingdom.

Bryan is an senior communication major. He can be reached at BryanMM@jbu.edu.