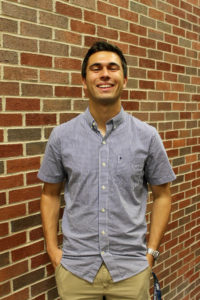 Todd decided to join the club anyway. “I’ve been interested in politics since I was young,” said Todd, “I’ve always been involved.”

Todd’s mother is native to Georgia, a country situated south of Russia, sandwiched between the Black and Caspian Seas. Georgia has experienced turmoil due to Russian interference.

“I grew up hearing the perils of communism,” Todd said, which led him to form strong beliefs about politics, the importance
of religious freedoms and the bene ts of a free market system.

He stated that the difference between high school and college for him was that high school was “a whole lot of thinking and not doing.”

Todd says he was “baptized through fire,” as he started his Freshman year by joining the College Republicans. By his sophomore year, he was elected as president of the club. Since joining the College Republicans, Todd has sought to change the face of the Republicanism on campus and deal with the growing pains of the club itself. He said that he wants the emotional dialogue to be tempered with rational thought so that people might be properly educated about the issues and productive conversations can occur.

Todd has been active both on and off campus. He spent time interning at the Leadership Institute which focuses on “Training conservative activists, students, and leaders.” Todd says it is his hope to bring some of the knowledge and resources he gleaned from his experience there to the University and the College Republicans.

No longer do the College Republicans stand unrepresented. Along with Todd, today’s College Republican leadership team includes Ross Minner, Jackson Love, Cole Mowrer, Matt Logan and Caitlin King. They host events and raise awareness
for various issues. They work alongside various organizations and even cooperate with the Democrat club on campus.

In the future, Todd plans to stay politically involved and informed. He says, “Wherever I go being politically active is an investment.” Eventually, Todd has dreams to go into developing countries and aid their markets by introducing entrepreneurship and sustainable means of production.

Todd’s final word was an exhortation for his fellow students to think for themselves and act according to their own convictions. Todd professed a desire for students to delve deeper into the news and go beyond sound bites. “It’s important to get educated beyond the headlines,” Todd said. He encourages people to listen to full speeches, watch C-SPAN, and think about the implications of policies before solidifying their opinions.