As of September 13, more than 3,000 people have been shot and 522 of those are dead, due to the increasing gun violence occurring in Chicago over the past year.

The number of shootings this year surpasses the total amount of shootings from 2015, which was 2,980 incidents that resulted in 491 fatalities.

According to the Chicago Tribune, the violence in Chicago is the worst it has been in over two decades, with a total of eight people dead and 35 others wounded on the weekend before September 11.

The west districts are suffering from the most violence, with nearly a third of the 3,000 shootings taking place in that area. The Harrison district holds 423 people shot this year, as compared to last year’s total, 237.

Likewise, the Englewood district, on the south side, has increased shootings from 246 last year to 324 this year.

Much of the violence is pinpointed to the highly organized and structured gangs in the city and the transporting of illegal firearms through dangerous neighborhoods.

Another theory of the increased violence is a laxity in the Chicago police force due to intense scrutiny after the shooting of Laquan McDonald, a black teen who died at the hands of a white officer.

Because of this, the Chicago officers have proceeded in their work with caution, explaining to reporters from the Chicago Tribune their fears of being fired or sued due to a viral video.

Tom Kim, sophomore photography major from Plainfield, Ill., a suburb of Chicago, is not surprised by the spike in violent shootings.

“It’s always been on the news,” Kim said, “So every time you watch the news there is always shooting or someone dying. Everyday.”

Kim, somewhat familiar with the city, said the touristy part is almost free from the violence of the dangerous neighborhoods.

“It’s like two different worlds,” Kim said. “I have been to Cicero for certain things and it’s just super different.”

Hayley Sampson, a junior photography major, also from Plainfield, Ill., said she is not surprised by the increasing violence, but still saddened none the less.

“Seeing and hearing of the violence really just makes me incredibly sad,” Sampson said. “It hurts to see people hurting each 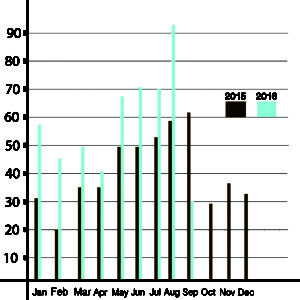 One story of such violence was seen last Sunday, when KeeKee Fleming, 18, was shot in the head while attending the vigil of her neighbor who was shot the previous day.

A gray van pulled up near the vigil ceremony and opened fire upon the crowd. Two other teens were wounded and remain in critical condition.

In a letter to the editor to the Chicago Tribune, Rodd Elges, a tort litigation attorney, wrote on what he believes is the source of the increased violence.

“The true root cause of Chicago’s gun violence problem,” Egles wrote, “is me.”

Egles followed this startling statement with an explanation stating that not taking action to curb violence makes him and other capable people responsible. “Edmund Burke was right: the only thing necessary for the triumph of evil is for good people to do nothing,” Egles said.Zeke Will COx

Egles then offered a challenge to the people of Chicago to join him in his fight against violence, and gave advice and tips for ending violence.