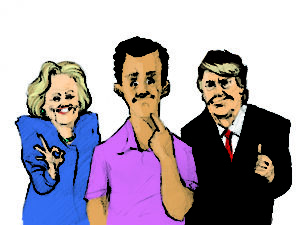 Republican presidential candidate Donald Trump made a surprise visit to John Brown University’s campus, and the business magnate had some suggestions to make.  “We need to build a fence around the Dogwood Trail until we can figure out what the hell is going on the Doug the Deer”, insisted Trump. The deer, he says, “Should be scared of us. Running in the woods, you know, doing deer stuff. Doug just stands there. Sad!”

When pressed further, Trump said “When we look at Doug, we know we’re not getting the best deer. He’s small, and mangy. Sad! He’s not scared of people. And I, frankly, can’t trust a deer like that.” Trump went on to suggest than an NRA-sponsored marksmanship and hunting class might be a remedy to the threats posed by strange deer on campus.

At this point in his press conference, officials manhandled several tearful and angry freshmen out of the room. Trump began to backpedal: “Many deer, I assume, are great animals. We have the best deer! We love our deer, don’t we?” Some pundits have pointed to what they call “token deer” seen at Trump’s rallies, but remain skeptical of the Republican candidate’s affection for deer in general.

In his closing remarks, Trump also suggested a ceremonial burning of the community covenant in the Cathedral Plaza and a merger of the university with the nearby Cherokee Casino. This suggestion was met with some enthusiasm by the Department of Biblical Studies and seniors living off campus.

Leaked emails have revealed that Democratic candidate Hillary Clinton, upon realizing that John Brown University does not have several million dollars available for what her accountants and corporate donors have called “speaking fees”, could not possibly be bothered to go anywhere near campus.

Libertarian candidate Gary Johnson, who has not quite yet reached the necessary polling numbers to appear on campus, has garnered some support at John Brown. Johnson’s voter base can be seen giving semi-coherent rants about the evils of the two party system, the genius of Ayn Rand and the sheer utility of cargo shorts. But these Johnson-voters are actually not all that hard to find, as they are usually very eager to inform you that they are soaring high above the partisan divide and are not to be shoehorned into voting for one of two inevitable but tragic candidates.

In other news, the eschatological outlook of JBU’s theological elite has taken a pessimistic turn. Professors and students alike are going back to Goodwill to, begrudgingly, re-purchase books from the Left Behind series. Copies of N.T. Wright’s Surprised by Hope are now available for a dollar or so at thrift stores across town, having traded places with LaHaye’s famous series. One student fellow for Paradosis, seen shamefully toting a Left Behind book, offered this quote: “I think we should cancel the whole conference. There’s really no point anymore in trying to work towards Christian unity. We need to hunker down and wait for the Rapture.”

Midnight Musings is a fictional satirical column. All opinons expressed in Midnight Musings are those of the writers and do not reflect those of The Threefold Advocate or John Brown University