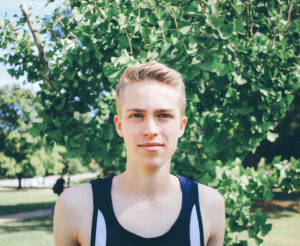 While many people would consider waking up at 5 a.m. to run multiple miles a terrible way to wake up, the John Brown University men’s cross country team thrives on early-morning workouts. The five freshman this year are especially excited about pushing themselves to the limit.

“I am looking forward to more morning practices, hopefully earlier, and hopefully every day of the week,” said Nate Wertjes, a Marketing major from Tumwater, Washington. “I really feel like Coach Schlochler is holding us back by only having 5:45 morning practices twice a week.”

Wertjes competed for his high school last year. His team finished ninth in the state, which he said is an impressive place due to the competitiveness of cross country in Washington.

Elliot Pearson, a Mechanical Engineering major from Siloam Springs, Arkansas, also boasted an impressive high school career. He finished first last year in the 6A division with a 5K time of 16:32.9.

“The cross country team has been a huge positive influence on my very positive experience at JBU thus far,” Pearson said.

“The cross country team has given me a group of people I know I can rely on early on in my college experience,” Nathan Pearson, a Digital Cinema major from Tulsa, Oklahoma, said. He added that he is excited to continue making progress this year, and looks forward to the continued opportunity to run with the team.

Arturo Rivera, a Mechanical Engineering major from Los Angeles, California, said his favorite part about running with the cross country team is the suffering that accompanies each workout.

“I like to push myself to my absolute limit until during practices and races,” Rivera said. “I have never been one To be satisfied with being average, so I always try to be the best that I can be.” Rivera won all divisions in his high school league and was able to compete at the Cross Country California Interscholastic Federation Championship.

Ethan Stafford is the fifth and final freshman who is rounding out the 2016-2017 team. Stafford is a Construction Management major from Carl Junction, Missouri.

The team finished sixth of eight in their first meet at Southwest Baptist University, and fifth of seventeen at the Missouri Southern State Stampede. They are scheduled to run in Clarksville, Arkansas, at the Ozarks Invitational on October 8.