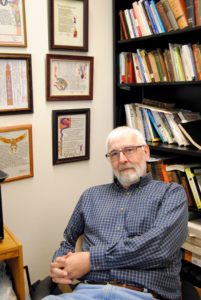 Psychology Professor David Johnson is something of a Renaissance man. That is, a man who is interested in the Renaissance and the Middle Ages.

Johnson is a proud member of the Society of Creative Anachronism, a medieval recreation group that is dedicated to learning the arts and practices of the ancient world.

SCA isn’t your typical renaissance festival group, as one can tell from visiting Johnson’s office, where parchment scrolls of handcrafted calligraphy hung on the same walls as collegiate degrees.

The organization’s main focus is on researching, learning and ultimately recreating the skills people would have learned back in the middle ages, which is usually defined by the organization as anything before the 17th century.

The SCA prides itself in being not just a renaissance festival group or a medieval reenactment organization, but instead a group for living history.

“We do use the term anachronism because we’re a little bit different than what you might call reenactors, like the Civil War folks, Johnson said.

“Their overall desire is to have things exactly the way they were, and they also reenact specific battles. We do recreation, so we do the things they might have done in the middle ages, but we’re not really recreating any particular battles.”

SCA offers opportunities for people to learn a variety of skills that would have been taught in the middle ages, including learning weaponry, woodworking and hat making.

“Probably the thing I do, for the most part, is missile weapons. So I do archery, and throw axes and knives and spears,” Johnson said.

Johnson is also interested in medicinal history. “Medicine is another interest of mine. Research is sort of my thing, so what I really like doing is when I find something really interesting in a medieval document, where they say to use this [medicine] for all of these disorders.” Johnson also said he likes to “go into modern research to see if it held any water. And amazingly, a lot of times they were onto things,” Johnson said.

Nearly every weekend, SCA’s various kingdoms hold events of all kinds, all over the nation.

These events range from simple gatherings to large-scale ‘wars,’ where two kingdoms will get together to stage battles with one another.

“I believe that my most medieval experience was the archery shoot from the Viking boat, Johnson said.

“After reading about Vikings (and of course watching the TV show!) it was an exhilarating experience to row [an] old, heavy, Viking boat with my fellow archers and then shoot at targets on land from the boat. Rowing back to the dock, we all had grins on our faces that I will never forget.

Johnson said this was the first time they had done this and it has become a yearly event at Lilies War.

Another notable thing about the organization is that every member has a registered name and device, which is another name for a coat of arms.

A person’s device is unique, and sometimes they can be rejected by the SCA for being too similar to somebody else’s.

“Heraldry is a very odd skill. They basically have a very limited vocabulary, in a sense. Everything is very specific in terms of what this device is made up of.

So, I actually have what’s called the blazon, which is written in words what’s on there. So my device is per chevron argent in vert, white is argent, green is vert, two anvils sable, sable is black, and a dragon argent passant, he’s a white dragon,” Johnson explained as he showed me his coat of arms, which was taped on the door to his office.

Johnson is one of the many people worldwide who have joined SCA for one reason or another, and the organization continues to grow each year.

“I think a lot of us are somewhat unique, idiosyncratic maybe, I don’t know, but it’s just a lot of fun,” Johnson said.