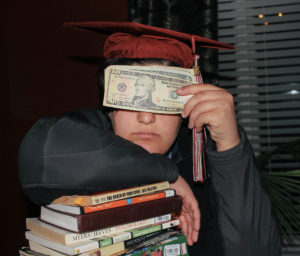 College is an adventure that comes with a high price to pay, but the experience and knowledge attained make it worthwhile.

Bailee Boehmer, freshman graphic design major, talked to many adults about college when she was a senior in high school. They advised her not to take any loans for college, because it was one of their biggest regrets.

Boehmer took their advice and worked 50 hours a week during the summer so that she could save money to pay for room and board on campus.

“It was not an ideal summer, and I wanted to quit, but the benefits of living on campus and graduating loan-free spurred me on. I will again cross this bridge next summer,” Boehmer said.

According to a survey published in The Huffington Post, seven out of 10 students plan to avoid using a car, rent textbooks or work longer hours in efforts to economize college costs.

Michael Bennett, senior business administration and management major, refused to take any loans and is currently working two jobs while commuting from Fayetteville, Arkansas in order to maintain low costs.

Bennett worked at a bakery and deli in a grocery store in Fayetteville, Arkansas, often training new employees.

He then moved to the grocery department and worked as a closing cashier, which meant he had to work until 1 a.m. In his sophomore year, he was promoted to closing manager and continued to work at night.

During the weekends, Bennett worked at Farmland Adventures in Springdale, Arkansas. He enjoyed the convenience with this job because it gave him the flexibility to work as early as 8 a.m. and as late as 10 p.m. or midnight.

“In the fall semesters, I worked about 40 hours a week between my two jobs in addition to taking 16 to 18 hours of classes. It left little time for anything else. However, I look forward to graduating debt-free,” Bennett said.

Bennet still works at both places, but doesn’t work as late at the grocery store as he used to. His hours at Farmland are still the same.

“The hardest part about paying my own way through college without borrowing money is honestly not getting to live on campus or experiencing the ‘college life.’ I have always commuted, so it has been significantly harder to get plugged in and feel a part of the JBU community,” Bennett said.

The majority of 2015 graduates took out loans to finance college costs, borrowing $29,411 on average, according to US News.

Schools provide need-based scholarships and grants to students, which provide a way for them to attend college at a more affordable rate.

When Boehmer was a senior in high school, she filled out several scholarship applications, but only federal and institutional scholarships came through.

“I did not receive any outside or local scholarships despite my many late nights and hours put into the process,” Boehmer said.

Boehmer is currently paying most of her tuition using financial aid from the state of Arkansas and the University. She encourages her fellow students to work hard and attend college debt-free.

“Find any way you can to keep yourself from debt. If that means filling out scholarship applications, getting a job, or even switching colleges or living situations, do it,” Boehmer said.