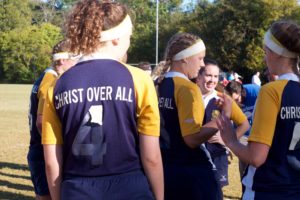 After defeating the University of Arkansas, the John Brown University women’s rugby team is now looking to reach second place in their division this year.

It has been a year since the Student Government Association officially approved the women’s rugby club. On the Saturday of homecoming weekend, the women’s rugby team beat the University of Arkansas with a score of 24 to 14.

Junior Rebecca Grace Baugher, the team captain, said that many players joined this year and it feels like she’s playing with a new team.

“It is a different chemistry that happens with new people,” Baugher said. “I think it has been really smooth and everyone has done such a good job of being teachable and just being very gracious with us as we try to accommodate new people.”

Baugher said she has seen major improvements from the girls who returned this year, but she was amazed at the progress of the new members.

Freshman Julia Hightower said that being new to the team is overwhelming at times. She found the sport challenging to play initially because she had never played rugby before and did not know the rules. However, Hightower said her teammates have welcomed and encouraged her.

“They really just embrace you as a sister,” Hightower said.

Junior Kelsey Bredthauer, a returning player, said that she was amazed at the rate new members are learning. She said she wants to encourage new players and help them understand the sport.

“It’s awesome to see their passion and helping cultivate that passion,” Bredthauer said. “In rugby, you can not play without the team. The way rugby is designed to work makes you trust your teammates, and that translates off the field into relationships.”

“We are grateful that they came and tried, because rugby is such a hard sport,” sophomore returning player Becky Yoon said.

The team’s next game is against Benedictine College in Kansas City. Baugher said that Benedictine has defeated them in the past and she is looking forward to the match.

“It will be a good teaching and learning game for our girls,” Baugher said.

Team members recognized their improvement as a team and expressed excitement about this upcoming game.

“I am confident that we are going to win because our new members have more experience and our chemistry has gotten a lot better,” Yoon said.

“We have better communication this year because we know what we are doing. We know what to expect in a game,” Bredthauer said.

Baugher explained that the team’s main goal for this year is to grab second place within their region. Kansas State University, University of Arkansas, Benedictine College and the University of Nebraska are also within this conference.

Baugher said that defeating the University of Arkansas – one of their toughest competitors – in their last game has given the team hope that they can take on their division and reach their goal.