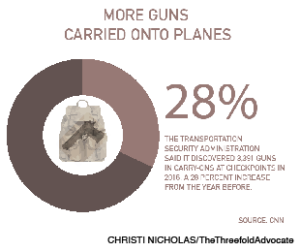 The Transportation Security Administration (TSA) released information that there were more than 3,000 firearms in carry-on bags in 2016, a 28 percent increase.

Out of the 3,391 firearms that were found, 83 percent of them were loaded and 17 percent were unloaded, according to CNN.

Hartsfield-Jackson Atlanta International Airport had a total of 198 guns found in carry-on bags. Dallas/Fort Worth International came in a close second with 192 discoveries. The Fort Lauderdale airport, where the shooting occurred in early January, was not ranked by TSA for having high amounts of guns in carry-on luggage.

Grace Nast, senior photography major, and Andrea Nast, sophomore history major, said they think that guns should be prohibited in carry-on, but still be allowed to be checked. They both agreed that if they were banned from being in carry-ons, the number of shootings would decrease.

The TSA rule for guns said they “prohibit guns in carry-on bags, but they allow passengers to ship guns if they are unloaded, put in a hard-sided, locked container that only the owner has the ability to unlock, and placed in a checked bag. Explosive or flammable ammunition such as gun powder is banned, but bullets are legal if carried in checked baggage,” according to NBC.

TSA does not track the number of guns that passengers place in checked bags, but it is not a rare practice. Most airlines detail their gun-carrying policies on their websites.

Esteban Santiago killed five people and wounded six others at Fort Lauderdale-Hollywood International Airport. Santiago, who is an Iraq War veteran flying to Florida from Alaska, stepped off his Delta Airlines flight on Jan. 6, retrieved his 9 mm walther handgun from his bag and opened fire on travelers. Santiago allegedly loaded the weapon in the bathroom and re-entered the baggage claim area, aiming at people’s heads and bodies and walking while shooting, according to ABCNews.

According to the FBI, Santiago said he carried out the attack because the government was “controlling his mind.” Later, at the FBI office in Miami, authorities say Santiago mentioned ISIS and admitted to participating in Jihadi chat rooms and communicating with like-minded individuals who were planning attacks, reported ABCNews.

Fort Lauderdale-Hollywood International Airport took steps of cutting law enforcement jobs, which left them short staffed. Record show Broward County cut more than two dozen jobs and ordered many of the deputies to move from the terminals to direct traffic along the curbs rather than guard the public areas inside, according USA Today.

Santiago’s next court date is set for Jan. 30.