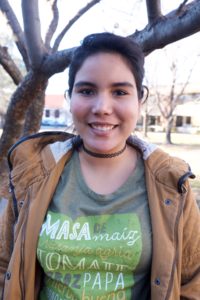 It was Monday morning, and I woke up suddenly thinking that I had missed my 8 a.m. class. Soon I closed my eyes again, comforted by the fact that I was able to enjoy my morning in bed. Christmas break had just started. Later that day I put my Star Wars: Episode IV t-shirt on, anticipating that day: I was going to see Rogue One: A Star Wars Story!

I watched the Star Wars movies for the first time on January of 2015. Months ago I heard that Diego Luna, the Mexican actor who plays Cassian Andor, was going to be part of the Rogue One cast, and that made me more than excited. I remember Diego for his role on The Terminal, and was excited to see him in a Star Wars film.

At the movie theater, I felt chills as soon as I stared at the Lucasfilm logo. For so long I had waited to see Darth Vader on the big screen. The funny thing is that my heart pounded the fastest in Diego’s first scene on the movie. His mouth articulated perfect English words through his thick Hispanic accent.

I was beyond happy. I was on my fifth month away from home, during the coldest winter I had experienced, and missing Spanish more than ever. For this reason I would sometimes exaggerate my accent, adding rolling r’s where they shouldn’t be and teaching my friends how to say Spanish phrases, so I would never feel away from home. The people around us never forget how important representation is.

After I saw the movie, I read so many articles about people like me, who were so excited and proud of Diego’s role and performance in the movie. Not just that a Hispanic character had a part in a Star Wars movie, but a Hispanic was of the main characters in one of the most famous and loved movie franchises in the world.

Representation matters. It wasn’t until I came here that I realized how different I could feel from other people. I felt so much more appreciation for Princesses Tiana, Pocahontas, Elena and Moana (though Moana isn’t technically a princess).

The fact is that people like me (with such a magical brown-colored skin) do feel different. Our accent might make us feel uncomfortable; when people assume things based on serotypes it might make us feel uncomfortable. That’s why representation is so important for me; it makes me feel integrated, important, brave. Like Amy Chua put it, “a foreign accent is a sign of bravery.”

Morales is a sophomore majoring in engineering. She can be reached at MoralesP@jbu.edu