The Cathedral of the Ozarks brimmed with faculty, alumni, people from the community and students with overstuffed backpacks on the day that Former Governor of Arkansas Mike Huckabee spoke.

They assembled in the pews, on the floor in front of the stage and down the center aisles. On the right side of the chapel, student in business suits waved a large paper welcome sign when Huckabee took the stage. On left, people garbed in white t-shirts stood silently. The t-shirts read “Stand for love,” “No ban, no wall, no hate” and “Minority rights are human rights.”

During the chapel service, a group of protestors stood silently in white t-shirts against the left wall, in opposition to Huckabee’s selection as an honorable Christian civic leader.

Huckabee said he was curious as to how the protestors and petitioners derived that he should not have been selected.

In contrast to many of the beliefs of the protestors and petitioners, Huckabee said he believes he is not the poor example of civic Christian leadership as evidenced by much of his previous work starting back to his middle school days. At that time, the public schools were integrating minorities. Huckabee said he and a black friend were instrumental in quelling fights and bringing about a peaceful atmosphere in his school.

Huckabee said he appointed more women and African Americans in executive positions than any other Republican governor in modern times, since the early 90s.

“On the day after 9/11, guess which governor invited members of the Muslim clergy to the Capital to express that people needed to be very careful not to brand all Muslims?” Huckabee asked. “That was me.”

Teague Broquard a freshman political science major, said he was disappointed with the answer Huckabee offered at the Q-and-A after inquiring about a tweet Broquard said he deems questionable: “Flight out of Panama City, Florida is delayed 2.5 hours so far. Foggier than Rep. John Lewis’s memory.”

“I think that as Christians we need to be able to take responsibility for the way our words have affected people,” Broquard said.

Likewise, Celeste Lindsey, a sophomore art and illustration major, said she felt disconcerted by Huckabee’s tone during the Q-and-A. She asked how Huckabee would respond to minorities about social issues such as the black lives matter movement and ban on refugees.

“I don’t want to outright say he was being racist, but his tone was like ‘let me tell you about [what] your people do in America and why you need to stop complaining about all this stuff.’ That’s what his tone felt like to me,” Lindsey said.

In contrast, Chipper Via, a junior who led the on-campus demonstration, said he felt grateful for the respect Huckabee displayed to Via after the Q-and-A where they met. However, Via said Huckabee danced around many of the questions in a professional and prideful manner.

Via said he thinks many people genuinely sought to understand Huckabee and how he reconciles his faith with some of his policies but never received a satisfactory answer.

“He was very defensive, not really willing to admit any wrong, super prideful in the way he answered his questions. He didn’t exhibit a lot of humility,” Via said.

Other students were excited and pleased with Huckabee’s visit to campus and supported the protest.

Jackson Love, a member of the College Republicans group on campus, said he supported the protest as he believes in the freedom of speech and the right to protest as stated in the First Amendment.

Love also says he advocates for diversity of thought and that inviting Huckabee to JBU promoted the opportunity for healthy discussion.

“Regardless whether I believe or appreciate his stances on issues, I think it is important for students to see both sides. I think it was wise of them to have a Q-and-A where students can bounce off ideas, criticize him, see where he stands. It ultimately needs to be a learning experience,” Love said.

“Governor Huckabee responded to the protests in grace and gave a solid message on being salt and light as believers in Christ — an applicable reminder to all the JBU students, protestors and supporters, who desire to make a positive impact,” Jackson said. 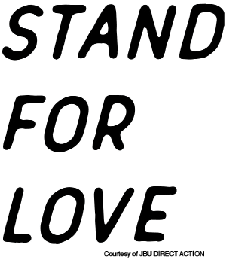