A bone marrow transplant may 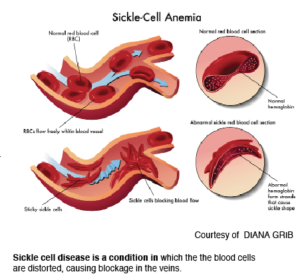 be the answer to a disease that ravages hundreds of people’s blood cells. A breakthrough occurred in the fight against sickle cell disease with the discovery of a treatment that changes DNA.

A teenager in Paris had Sickle Cell Disease treatment in early March and the treatment, which consisted of an attempt to change his DNA, reversed the effects. The world’s first procedure at Necker Children’s Hospital offers hope to the millions of people who have this disease, according to BBC.

Alyssa Bowerman, a senior nursing student, said “sickle cell disease is a severe form of heritable anemia. The hemoglobin within the blood cell is mutated distorting the red blood cell…This leads to a lack of oxygen circulating because the mutated red blood cell cannot carry as much oxygen.”

“People with this disorder have atypical hemoglobin molecules called hemoglobin S, which can distort red blood cells into a sickle, or crescent, shape,” according to the Genetics Home Reference website.

The therapy has worked on the teenager in Paris for 15 months so far. The scientists altered the genetic instructions in the teenager’s bone marrow so it made healthy red blood cells, according to BBC.

Around the world, people are working with those who have this disease to help with the research to learn more about how to fundraise and make a difference. One such place is the Sickle Cell Disease Association of America.

“For more than 35 years, the Sickle Cell Disease Association of America, Inc. (SCDAA) and its 50-plus member organizations and affiliates have demonstrated how community-based organizations can work as partners with medical facilities local and state government agencies to pursue national health care objectives,” according to the website for SCDAA.

While many nursing students at JBU have yet to learn much about sickle cell disease and the new genetic ideas and research coming to light, this new form of gene therapy along with the remission of the teenager in Paris has given hope to researchers and scientists that work hard for the improvements in research of sickle cell disease.