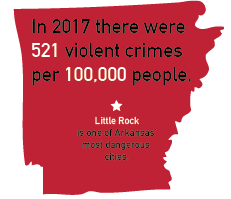 In 2017, there were 521 violent crimes per 100,000 people in Arkansas: 141 more violent crimes than the state of New York (number 23 on the list) and only 19 fewer violent crimes than Louisiana, ranked fifth. Little Rock is one of Arkansas’ most dangerous cities. In its population of roughly 200,000 residents, there were 16 murders and 1,018 aggravated assaults recorded in 2016 alone, according to FBI Uniform Crime Reporting.

“Situational awareness around us is key,” Scott Wanzer, director of Campus Safety at John Brown University, said. Wanzer worked as a Police Officer in Tulsa, Oklahoma for 27 years before moving to JBU. “Up here in the corner in NWA, I think things are a little bit different,” he said.

Wanzer said that crime in Tulsa was much more prevalent than crime in Siloam Springs, but cautions citizens against becoming complacent. “We’re not lax. I mean, we talk about active shooters and we have active shooter training,” Wanzer said. “We don’t want to be naive or ignorant to the crime that could be present.”

While the largest reported crime on JBU campus is petty theft, Wanzer said that vigilance is necessary for students on campus as well as off campus. “We encourage students not to walk alone at night, to take a friend with them,” he said. “If you make a Walmart run at ten o’clock, yeah, it’s a lighted parking lot, but there may not be a lot of activity. Maybe the one pedestrian that you see, maybe he’s a bad guy.”

Wanzer suggested that people walking late at night in the dark should have a way to attract attention to themselves. He said that people looking to commit violent crimes want to do it in secret and do not want attention drawn to themselves. Carrying a whistle, having a finger on the panic button, carrying a personal alarm  or screaming loudly are all ways to protect yourself from violent crime.

Campus Safety also offers self-defense classes at the beginning of every semester, led by martial arts enthusiast and Campus Safety Officer Jess Thompson, as well as rotating safety tips on the Here&Now newsletter.

“One of those tips is encouraging students, primarily of the female gender…it has nothing to do with a female’s ability to protect herself, but in our society and in our culture the statistics are clear: females are perceived as easier to victimize,” Wanzer said. He suggested that students who must walk at night walk with a group of friends, or call Campus Safety for an escort back to their dorm room. To prevent theft, Wanzer said students should always lock their dorm rooms when they leave and not leave any valuables unprotected.

While the rate of violent crime in Arkansas may be high compared to other states, Wanzer said that Siloam Springs is a relatively safe community.

“We affectionately call Siloam Mayberry, or, for the younger generation, we call it the Shire,” Wanzer said. “Not only do I think that Siloam Springs is a very safe community, but John Brown University is also as safe, or maybe safer.”