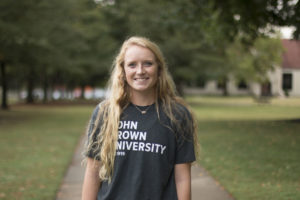 Kinzee Mayo is a transfer student from Butler Community College. A freshman from Anthony, Kansas, Mayo stands tall at 5’11. She is middle and outside hitter for JBU’s Lady Eagles volleyball team and has played in 4 games this season, all winning games. The current overall team record for the Eagles volleyball team is 9-2.

“I chose JBU because of the people and the aspects of the volleyball program. I was looking for a place to grow as an athlete, as a student and in my faith and JBU was a perfect fit,” Mayo said. Mayo’s experience at JBU so far is different than her experience at Bulter Community College. “The academics at JBU are definitely more demanding, and the people are honestly much nicer here. I really enjoy my life here at JBU,” Mayo said.

As the season progresses with only eight home games and 25 road games, the semester will be pretty busy for Mayo. “Season is going great. We as a team have a pretty solid record, and I love my teammates and coaching staff,” she said.

“Kinzee brings some extra experience to our team as she is a junior college transfer from Butler Community College,” said Ken Carver, JBU volleyball head coach.

Carver continued that Mayo played often at BCC during her freshman season and because of that was already acclimated to the strenuous demands and speed of collegiate volleyball at JBU. “Kinzee is a utility-type of player possessing the ability to play any of the three front row positions for our team.  Beyond that, however, she is extremely coachable and demonstrates a team-first attitude which makes her versatility even more special,” Carver said.

“Kinzee’s character, core values and personality all blend exceeding well with the players we already had on our team. She brings a strong work ethic to our team, but definitely adds an element of fun to everything she does. Two of the things I am most impressed about Kinzee are her desire to grow and learn both on the court and off as well as her faith,” Carver added.

Mayo “gave up a returning starting position with her BCC team to come to a team where we weren’t sure where exactly she might fit.  While Kinzee saw a lot of things she wanted to experience and be a part of at JBU when she came and visited, it took her to lead out in faith that this was the right time and right opportunity that God was leading her to,” Carver said.  “In coming here and being a part of our team and the JBU community, I believe Kinzee has found the environment she was wanting to be challenged to grow holistically as a young woman.”

Carver continued, “It’s taken a bit for Kinzee to settle into our training system and expectations, but we’ve seen her begin to make some really good progress on the court.  Kinzee’s impact with our team is still being revealed, but she is another example of God bringing the right young woman to JBU at the right time both in her life and in the life of our team.  We’re excited to have Kinzee as a part of our team and to see how she will continue to grow as a person and as a player over the course of these next three years.”