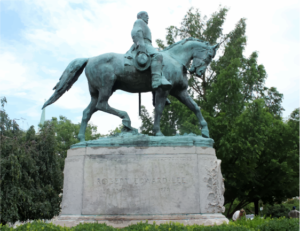 On the foundation of the General Robert E. Lee statue in Emancipation Park in Charlottesville, Va., someone spray-painted the words “Black Lives Matter.” Although city workers scrubbed away at the paint, a faint outline of the words can still be read.

This is just one cry out of thousands of Americans who believe that the Confederate statues, among other things, are an ongoing symbol of white supremacy.

On the weekend of Aug. 11, white nationalist forcefully protested the Charlottesville city council’s decision to remove a statute of General Robert E. Lee. Counter-protestors were present, in favor of the statue’s removal. as well to protest the white nationalists. Protesters thronged around the statue of General Lee, shouting various hate-filled chants and slurs.

Since the tragic and bloody events unfolded in the past month in Charlottesville, many American have since demanded the removal of Confederate statues and memorabilia throughout the country.

This demands Americans to ask, “Should we remove or celebrate these statues?” This is a tricky subject which requires time, energy, research, and careful deliberation to address.

When deciding when to remove such statues, we the Threefold Advocate believe there are several considerations to make. What is the history behind the statute? Was it constructed as a means to honor American heritage? Were any subliminal messages intended in the creation of the statute?

It is important to note that the history behind each Confederate statue remains unique. Many of the statues, were erected to memorialize the past, while others were constructed for less noble purposes.

A chart published by the Southern Poverty Law Center in 2016 shows large spikes in Confederate statue construction during two periods of civil right unrest: the early 1900s, then again in the 1950s and ‘60s. In the 1900s, the Jim Crow laws were established and in the 1950-60s, people fought against discrimination. It is these types of statues that support a dishonorable agenda. These monuments have isolated, inflicted fear, and subjected the lives of minorities  to cruelty throughout the century.

Regardless of the purpose behind each statue, we believe they are a piece of American history, a part of the story of where we are today. While the ideals behind the statues created as a symbol of white power are despicable, we the Threefold believe that the Civil War, the Jim Crow laws, civil unrest in the 1950s, and the incident in Charlottesville are still pivotal pieces of American history that must not be ignored.

Thus, we the Threefold believe that recognizing our troubled past is the only way for us to secure a better future. If we ignore the struggles the statues represent, we ignore some of the biggest events in the history of our country. We the Threefold deem slavery and racism as heinous acts of prejudice and hate, and condemn any encouragement thereof, but it is just as important to educate people about the injustices and tragedies suffered during this time period.

Education is important so we can still recognize our history but strive for a more inclusive society in the future. Practically, one way to do this is to create a plaque to reside next to a Confederate statue condemning the actions of prejudice and hate of the past as part of the past and something to move beyond.

Another way may be to place any removed monument in a history museum, which would allow visitors to become educated on the crimes of the past and learn from those mistakes.