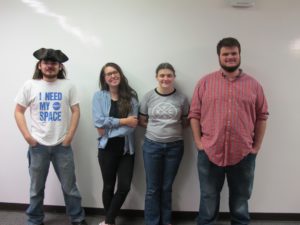 On a recent Friday after class, the John Brown University debate team piled into a JBU minivan and drove five hours to the University of Arkansas at Monticello for a weekend of fast-paced research and argument with students from other colleges.

The next morning, they dressed in their best business clothes and headed to the UAM campus, where they met their competitors and began researching topics like student debt default rates, the merits of Sesame Street versus the Muppets, the benefits and drawbacks of space exploration and the problem of global poaching. Twelve hours later, they were exhausted, their hands ink-stained from the note-taking.

Debate tournaments are where participants learn to find information quickly, organize points and argue a side of an issue they may personally disagree with. Debate can help any student become a better speaker, debater, storyteller and critical thinker.

There are many different formats of debate, so those first starting in college may have to adjust. JBU competes in the International Public Debate Association using a particular format of debate called “Lincoln-Douglas” style, a format where, debaters compete one-on-one or two-on-two.

Before the debate begins, participants are given a sheet of paper listing five topics. They take turns marking off the topics they don’t want to debate until there’s only one left. Once they’ve decided on a topic, they have 30 minutes to prepare. Then they argue, cross-examine and reiterate, alternating speeches from three to six minutes long. The round lasts 30 minutes and is judged by a single person and eliminations rounds are judged by panels of three. Debaters don’t find out their win-loss record until the end of the day.

Freshman Lydia DeGisi, a double major in English and biochemistry, is the most recent addition to the team, and the trip to Monticello was her first college tournament. “Debate is a lot of fun, and it really increases one’s knowledge of current events,” DeGisi said. DeGisi competed in debate in high school, but the format was different, so the Monticello tournament was a bit of an adjustment.

Assistant Professor of Communication Candy Gregor is the team’s new coach. “Debate helps students learn to think on their feet, to argue from different perspectives,” Gregor said. “They keep up with current events. They understand the power of language, the need for examples, and the necessity of holding people accountable for what they say.” She added that JBU students “have shined in competition with students from colleges throughout the South and the Midwest.”

“I’m excited about our young team and its potential.” Gregor said. Gregor became debate coach with little previous forensic experience. This tournament was just as much of a learning process for her as it was for us.

On Sunday, debaters who had won most of their rounds the day before continued competing, but none of those on the JBU team had won enough debates to advance. With nothing left to do, the team headed back to JBU. Although the team didn’t come back with any trophies, debate team members said that their experience at the tournament was a nonetheless enriching experience.

Those on the debate team said that their experiences as debators would help them navigate a complicated and divsive intellectual envrionment. The strengths of the team lie in gathering empirical evidence for one point or another, and is part of a rich American tradition of civil disagreement.