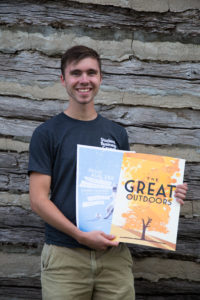 You might picture a graphic designer cloistered inside the walls of one of the campus art buildings, eyes aglow beneath the 5K Macintosh monitors, pixels zooming across the screen as the coffee drains into the late night. That is certainly true of senior graphic design major Andrew Brott. But, for as dedicated to his solitary craft as he is, Brott is perhaps one of the most interconnected and active students and artists within the John Brown University community.

Brott is involved in Student Events and Activities as the assistant communications director, where he creates posters for marketing events. He’s been involved with Enactus this past year as the marketing office, creating designs and posting to social media. In previous years, he’s also worked for JBU Communications, doing design work as his work study and over the summer as full-time employment.

He’s enjoyed the opportunity to create work for John Brown University itself. “It’s been a bunch of different facets: I’ve been able to explore graphic design options, my own design style, and learn what it looks like to be a graphic designer in the real world,” Brott said.

Brott’s expertise isn’t limited to JBU’s purview; he has also contributed much of his work to the local Siloam Springs community. “I’ve also been working for Main Street Siloam this semester, doing re-branding for all of their events,” Brott said. “Getting plugged in with the town is really fun.”

Brott describes his creative process as any classically trained graphic designer would. “Whenever I get an assignment or get a job to do, I see what I have to do and define the problem,” Brott said, as though reading from a Graphic Design I textbook. “Then you can find the solution. You go through a bunch of rough drafts and sketches for possible solutions. You don’t just pick one right away. You weigh your options and go back and forth with the client or teacher.”

Brott’s designs are not only beautiful; they are functional. For Brott, the function is what gives the final product meaning. “Whatever it is, it’s a process of perfecting and getting at the details of things,” Brott said. “You start with a broader view and then zero in on what you need to be better at.”

The drive to improve himself has caught the eye of JBU art professor Bobby Martin. “In class, he’s one of the top producers,” Martin said. “He did a really quality screen print last semester, going above and beyond, trying to push himself. I appreciate that desire to go beyond the norm. He’s very curious; I love the curiosity.”

Martin describes a trip he took with his wife and Brott to a printmaking conference in Atlanta, Georgia. Brott, who’d never taken a printmaking class or had any prior experience with the artform, went because, as Martin describes, Brott is eager to learn. “I knew him a little bit before that, but that really cemented my opinion of the kind of person he was,” Martin said. “He went to every possible presentation he could, and was very eager to learn new stuff. That’s what impressed me.”

Brott hasn’t always been interested in graphic design. Before coming to JBU, he had invested in digital and analog art, but hadn’t quite decided on a field of study. “[It was] something I grew to love when I came to JBU, and was glad I was a part of,” Brott said. “The more I learn about graphic design, the more I love and think that it’s useful and important. It hasn’t been a long-lasting relationship with graphic design, but something that’s been growing over time.”

When Brott’s design head is not drifting through Adobe Creative Cloud, he makes regularly forays into music. “I play piano, guitar, and trumpet. I still like to do those on the side, for fun,” Brott said. “I wrote a song for the talent show last year, just a goofy song. I’ve written other songs and enjoyed the whole song-writing process and being able to create in that, too. The idea of being able to be able to express yourself visually or in music is really exciting to me.”

Brott’s musical talent has placed him in the inner circle of musicians responsible for the upcoming senior-film-gone-musical, which is being directed by Chris Ridings, a senior digital cinema major at JBU. Brott describes Ridings’ musical as “a tribute to Siloam Springs, kind of like how La La Land was a tribute to L.A. This is his love letter to Siloam Springs.”

This inner circle consists of Brott, Coral Bradshaw, and Haven Brown, who, as Brott describes, “have been busy with that this semester, and it’s been a really interesting experience.” Brott has had music arranging and composing experience before, but enjoys the larger scale and the collaboration.

Brott brings curiosity and collaboration into every element of his artistry, and Martin has taken note. “It’s not just about being in your little art world never getting outside the building,” Martin said. “There are other things happening that he wants to know about. And to me, that’s what a college experience is about. Soaking in all you can, not just going to classes and pulling all-nighters. There’s more going on, especially outside of our art world, because that’s where the real world works. Then you can be involved with people with different interests and faiths. It enriches your life, and I see Andrew doing that.

For Brott, his faith is the foundation and source of meaning for his creative drive. “Anyone who’s passionate about creating something is an artist,” Brott said. “I think God calls us to be artists and to reflect Him in our own lives. It’s meaningful to create because that’s who God is.”