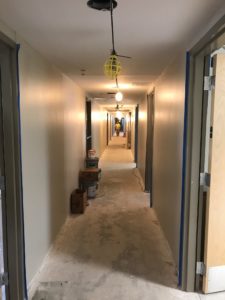 In a classic re-telling of rags to riches, the Mayfield $6 million renovation is underway and the dim lighting and faulty fire alarms are being thrown out of the window. Next semester’s group of girls will be the first ever to experience the new and improved dormitory.

Riley Jackson, a junior nursing major, lived in Mayfield her first two years at John Brown University and expressed her excitement for the dorm’s new direction. “I enjoyed living in Mayfield because the community was really good and it was really social, but the building itself was a little rough,” Jackson said. “I think the renovation is a great thing. It’s about time.”

According to the university website, the dorm has housed nearly 10,000 girls in its 52 years. Many women have positive memories o the dorm and feel bittersweet about the transformation the dorm is undergoing.

Hannah Owens, a JBU alumna, shared some of her favorite times in Mayfield Hall.  “When I was a freshman, we would unicycle all around the halls. I became a proficient unicyclist and it was the greatest memory of my time in the fields of May,” Owens said.

“Every dorm has its own personality and Mayfield is really social. I met a lot of my really good friends in Mayfield, and the RAs are great at organizing events,” Jackson.

“We are letting go of old Mayfield, so I do think that it is important for us to grieve and remember all that Mayfield has been, but also be joyous and thankful that someone provided this money for us to have this a better living space,” Lauren Lane, Mayfield Residential Director, said.

While rich in memories, the building itself has become outdated and the renovation will be a way for the dorm to preserve its history while becoming a better living space for current and future Mayfield girls.

Jackson pointed out a few things wrong with the building. “There was no AC, so there was only cold air in the summer and hot air in the winter. Also, somehow, I always had a room that had a hole to the outside that let wasps into the room. So I was the designated wasp killer,” Jackson said, laughing.

“When I came in Fall, I was working and meeting freshman, and they would ask me, ‘What’s up with the lights?’ and I would tell them to turn them on,” Lane said. “Then I realized there were no overhead lights. Now there will be one main overhead light—and also above the sink there is a nice light so girls can do their makeup and actually see.”

The renovation is also adding movable furniture. “The beds are movable, stackable and shiftable. The new closets and dressers allow you to move and loft. Nothing is stationary,” Lane said. “The student’s will really be able to organize and move their room how they want it to be.”

Perhaps one of the biggest challenges expressed by former residents was the community bathrooms and the lack of privacy. Therefore, the new renovation is installing a changing room into the structure of the showers.

The renovation will also allow unlimited access to wheelchairs. “We are now going to be handicap accessible with the addition of the elevator and the handicap rooms and showers. My RAs and I are excited about that new edition,” Lane said.

Structural changes aside, Mayfield will also add common spaces for residential convenience. “One thing I am excited about is the addition of common spaces in new wing,” Lane said. “You used to have to walk all the way to the main lobby or the basement, but now there is a really big common space on that wing.”

The common spaces are important to the Mayfield community, and will help the girls have hall meetings and events. The structure of Mayfield is changing, but the personality and community of the dorm will stay wholly intact.

“I know personally that transitions are hard,” Lane said. “I think it’s important for us to work to remember all that Mayfield has been and all the memories that have occurred here and be thankful for that. But I also know that we are so blessed to have this renovation because it is good and it is needed.”