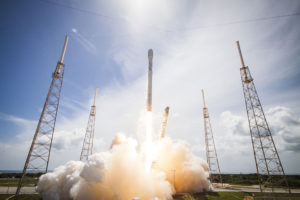 Investors’ and space fanatics’ hopes of manning their own mission to the moon or Mars rose as the re-suable rocket descended back onto the SpaceX landing platform.

SpaceX has shaken up the once-monopolized space exploration industry, and has a complicated history with other private and public space exploration projects. Dr. Tim Gilmour, assistant professor of engineering at John Brown University, makes regular visits to the Kennedy Space Center in Merritt Island, Florida, and has seen some of its history through the years.

“In the past decade, [NASA] has started bringing commercial space exploration to Kennedy Space Center,” Gilmour said. “SpaceX, Blue Origin, Lockheed-Martin, they’re trying to bring as much commercial investment as they can.”

Gilmour describes the SpaceX and Blue Origin rocket factories there at the space center, which are actually factories previously developed for the United Launch Alliance.

The United Launch Alliance previously consisted of the competitors Lockheed-Martin and Boeing. “[They] typically compete for different projects,” Gilmour said. “If the NAVY or Air Force wants a new project, they’ll both submit proposals and the company with the best proposal at the lowest cost will win. But with space, the government said, ‘we don’t want two competing companies; we want you to work together because we need this to be reliable.’”

The companies joined forces, causing a monopoly in aeronautics and space development, which skyrocketed costs by billions of dollars. “Then SpaceX came along ten or fifteen years ago and said, ‘we can do it cheaper,’” Gilmour said. SpaceX, as a private company, broke the monopoly and disrupted the entire industry. “Not quite as cheaply as India, who’s still doing it ten times cheaper than anyone else for sending up small satellites. But in America, SpaceX and Blue Origin are testing rocket engines.”

Blue Origin, a SpaceX competitor started by Amazon founder and CEO Jeff Bezos, recently landed its own reusable rocket, echoing the success of SpaceX two years earlier, ramping up efforts to compete with the leaders in the industry and paving a new road to the stars.

Questions of the feasibility of investment in space exploration by multi-billion dollar companies in a competitive industry leave some skeptical. Caleb Maine, a senior international business major at JBU, takes a more financial stance.

“As a business venture, it seems to be all cost, and zero benefit. Especially for the people investing into it,” Maine said. “Investing in leaving the planet is the only benefit you could get out of it other than recreational enjoyment of investing in space exploration, the novelty. There’s not really a product to be gotten out of it, there’s no consumption. So what’s the revenue? Are there enough people with money to meet the demand for space tourism?”

However, the more research and technology is developed around space exploration, the lower the cost will be to send things into orbit. “Right now, it costs about $10,000 to send a kilogram into orbit,” Gilmour said.

“Perceived value is what I see the near future of SpaceX hinging upon because with space tourism, a customer’s not getting a good or service, it’s just the novelty, it’s pretty much 100% perceived value,” Maine said.

But space tourism isn’t the only reason SpaceX, Blue Origin and others are spending billions on new rockets. Blue Origin’s recent development of the BE-4 engine, a first-of-its-kind liquid natural gas engine, suggests the company plans for orbital and deep space missions as early as 2020, along with national security launches aimed at inter-continental ballistic missile and anti-missile defense capabilities.

Another tantalizing prospect for space exploration is the possibility of mining resources from nearby celestial objects like the moon or near-Earth asteroids. These include precious metals and other elements used for construction, either transported back to Earth or used for future structures in space.

“Staying on Earth versus leaving Earth, getting materials from under the Earth’s crust versus a meteor or the Moon, whatever has more perceived value for people is going to be the best business venture,” Maine said. “I think the success of SpaceX relies on how they convince the public and investors to perceive the value of the pursuit to be higher than its cost.”

However, there may be legal bottlenecks in the modern space race. “I think there will be local and political problems that will disrupt our aspirations to make space travel cheaper,” Gilmour said. “For example, the United States is $20 trillion in debt, and it keeps increasing. I think at some point, that’ll become a big problem for the USA, when we won’t be able to borrow money as easily.”

Gilmour pointed out the many problems humanity still faces on Earth. “There’s still people dying for lack of clean water, other problems that need dealt with. Politicians like to skew funding, and maybe it should be shifted a bit the other way, put some of that money back into helping other people or reducing our debt.”

“I don’t know how to judge whether investing in space exploration is pointless other than looking at what investors are getting and how soon they’re getting it,” Maine said. Projections for when investment in space exploration will pay off is still in terms of decades and centuries rather than months or years, which leaves many people wondering if throwing money at the stars is worth it.

Maine notes that most proponents of space exploration are simply eager to push humanity into a new era. To him, it depends on the industry’s ability to market itself to investors. “A lot of that relies on their fascination with space, and stirring that with them. To get someone to invest in an intangible takes some convincing.”