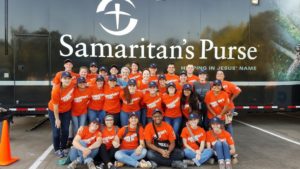 After Hurricane Harvey hit Houston in late August, Student Ministries Leadership Team offered the service trip to Houston for students to serve the residents of the city.  JBU partnered with Samaritan’s Purse to help the community.

On Saturday, JBU students worked in homes by cleaning up yards, taking down dry wall and removing moldy ceiling.  The students split up into two groups to work in different areas of the city.

One of the homes the students worked on, the homeowner told her story to the group.  She said the flood water was up to her chest when she walked out of her house.  If it had not been for her neighbor, who swam to her, she would have been swept away by the current.

Bridget Schneider, sophomore, said she enjoyed meeting the homeowners of the houses they were working on.

“Despite losing everything in this world they still had something out of this world,” Schneider said.

JBU students worked on six houses while they were in Houston and they met most of the people who lived in those homes.  Some students completed miscellaneous tasks around those homes while other students talked with the homeowners.

Acker said it did not take a long time for relationships to be built between the students and the homeowners.  As long as they took time to invest in the families, they developed those relationships in a meaningful way.

Samaritan’s Purse volunteers and JBU students worked for approximately six hours every day at the sites.  Julia Hightower, sophomore, said one of her highlights of the trip was seeing the transformation from the beginning of the day to the end of the day.

Once they finished a home, Samaritan’s Purse provided a Bible for every student to sign.  As a team, they gathered around the homeowners and presented the Bible.  Over the course of three days, JBU students presented four Bibles to different homeowners.

“I learned a lot about teamwork and the importance of having people help you out” Hightower said, recalling the experiences and lessons of the trip,

Hightower said that the Lord gives us relationships to help each other out and the team was able to work with one another to get the job done. She said there’s a lot more that still needs to be done and so much more that can be learned from Houston residents.

Schneider said people should continue to pray for Houston. “There’s still so much work to be done even though we worked on a couple of houses, there’s still thousands of people who need help.”