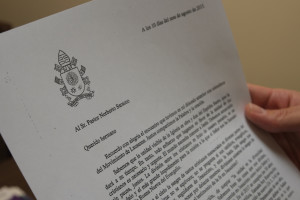 Pope Francis, who arrived in the United States this past Tuesday, sent a letter and gifts to the third annual Evangelical Catholic conversation earlier this month hosted by University of Saint Mary’s of the Lake in Mundelein, Ill.

Chad Raith, professor of biblical studies and director of the Paradosis center, was in  attendance as an evangelical delegate to this ecumenical dialogue.

“The Pope wonders: since we are spilling our blood together in death, should we not strive to share our faith together in life? Our ongoing divisions betray the blood of martyrs. We should lament this. We can do better,” Raith said, “and we are trying to do so through the Paradosis Center here at John Brown. I hope students make full use of the gifts they have by having the Center on campus.”

Raith further stated, “Many involved in current ecumenical discussions find the evangelical participation the most exciting and most promising. Pope Francis, who ministered around evangelicals in Buenos Aires, thinks likewise. His letter to our group reflects his awareness and interest in this dialogue.”

According to their website, this event is a “dialogue between Catholic and evangelical Protestant leaders who are in conversation about the work of global evangelization and Christian unity.”

“Primarily what I did was listen. With numerous theologians and other people who have been involved in the continuing ecumenical dialogue, I was really there to absorb and take in where the conversation already was,” Kinney said.

Kinney explained that building relationships was one of the most impactful things for him that occurred at the conference.

“It’s a beautiful thing to see two people, who fundamentally disagree as to how salvation is worked out amongst humanity, set that aside and engage in meaningful conversation,”  Kinney said.

“Some of these conversations were theological and some were personal. After attending the Lausanne event, I truly believe it takes the personal relationship in order to engage more comfortably in the theological conversations,” he said.

Raith explained that there are different ways to approach the conversation,“Each of which compliments the other. You need them all.”

“Some tend to focus on doctrines that unite and divide us — this tends to be my primary interest — while others focus on building relationships that allow for hard but healthy conversations. The Lausanne Movement dialogue, as well as Pope Francis I himself, tends to focus on the latter,” Raith said.