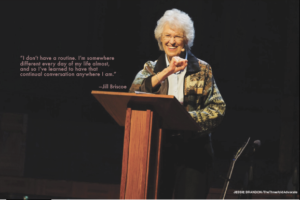 At a long table in the John Brown University cafeteria, Jill Briscoe sat with students and told stories from her days of holding illegal Christian meetings in Soviet countries behind the ‘Iron Curtain.’

In those countries, Christianity was limited to government-approved meetings and messages.

Briscoe’s stories showed how precious Scripture is to her and was to those she taught. She led illegal Bible lectures that people risked their lives to join.

At the lunch that followed her third talk, she told about a time when she taught the Bible to women who did not have the Old Testament in their language. The group had then pretending to have a birthday party when the police found them in an attic.

Another time, Briscoe’s husband Stuart, a group of church members and she pretended to be a tourist group.

Stuart Briscoe taught the group a book of the New Testament from memory because having Bibles with them would have ruined their disguise.

Briscoe used this story to emphasize to those sitting around the cafeteria table the importance of knowing Scripture.

She told The Threefold Advocate that Scripture is essential to her prayer life and relationship with God.

“If Scripture is God’s voice, how can I have a prayer time without Him saying something?,” Briscoe asked.

Briscoe said the most important aspect of her relationship with God has been “sorting out the discipline of presence” and “my devotion time with God – everything depends on it.”

She said that her devotion time looks like a conversation, or any connection with God.

“I read the Scriptures as His voice and respond back and argue with Him and say, ‘You must be kidding, God,’” Briscoe said.

“I could spend hours in prayer since the day I got saved, but not reading my Bible – that’s been hardest for me,” Briscoe said.

She explained the words of her husband helped her reprioritize Scripture in her devotional time: “What’s more important? That God speaks to you or that you speak to Him?”

She said that this epiphany of focus on Scripture enriched the whole of her prayer life.

“Because it was one-sided, and what good is that?” Briscoe asked. “Unless you know your Bible, you don’t know what to pray or how to pray or what is [God] saying.”

Briscoe explained that as a new Christian and student at the University of Cambridge, she subscribed to Scripture Union, a quarterly publication that helps give structure to devotional time. From it she learned to read Scripture and look for a command to obey, a warning to heed, a promise to claim, something about Jesus and something about her. “And then you talk to Him in prayer about it.”

“So, methods are good to get us going,” Briscoe concluded. She added that it depends on the person how much structure to use. “Find something that fits your learning style.”

“If you have a routine, that’s great, but don’t leave it there. Continue that,” Briscoe advised.