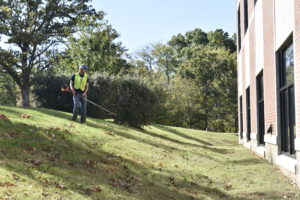 John Brown University is a campus of approximately 2,500 students who, on any given day, produce several hundred pounds of trash and recyclables. All that trash must be sorted and disposed of to make room for the next several hundred pounds. Every dorm must be cleaned, every lawn mowed, leaf raked, fallen limb moved and floor vacuumed. These daily tasks, while seldom considered in the day-to-day life of a student, are integral to the continued function of JBU—and these tasks are by no means automated.

Every morning, dozens of men and women wake up between 5:00 a.m. and 7:00 a.m. to drive to JBU and begin their work. Whether it’s working the grounds to maintain JBU’s campus or removing the trash to ensure its order, these men and women are committed to the small but integral task of maintaining the health of the University.

At least that’s what Travis Chaney, the foreman of the grounds crew at JBU, thinks—and the responsibilities of him and his team are numerous. “We’re responsible for all the mowing, edging, trimming, maintaining the irrigation system, maintaining our mountain biking trails, our cross-country trails, our sports fields, any snow removal, doing all the trash and recycling,” Chaney said. “[We] pick it all up, sort the recycling, haul the trash, we do a lot of the utilities construction, we’ll do the trenching and conduit work and then we get pulled in during the summer time to move the furniture in and out of dorm rooms to redo the floors.”

All these projects would be impossible to maintain with a team of only four people, though Chaney only has four people on staff. Much of the work is accomplished through JBU’s work-study program, and Chaney views his work as an instructor in that program. Chaney and his team see their roles, in part, as grounds workers and teachers. “We feel like our job is to be part of the students’ education in a different way, outside of the classroom,” Chaney said.

“What we care about is teaching students what it looks like to work, and to work hard and work well and do whatever task it is you’re doing with joy, insofar as it’s possible, and dignity. So, we’re trying to teach ourselves and our students focus and presence in the moment,” Chaney said.

Chaney said his mission is integral to JBU’s motto of “Head, Heart and Hand,” enacting the philosophy in a practical, hands-on way—an education method that certainly worked for Kate Barlowe.

Barlowe is a senior intercultural studies major who worked on grounds crew her freshman year. Barlowe feels her time with the grounds crew helped her better see her work in a redemptive light. “There was just something about working in the earth that felt so fulfilling,” she said.

“One of the coolest things about the job was that you could see the progress and the impact of your work,” Barlowe said. “Intellectual pursuits don’t show that as much. It was also cool to see the other side of campus, sort of behind-the-scenes. It gave me a whole new appreciation of JBU as a whole.”

Barlowe also said working the grounds helped her fulfill her calling as a Christian: “I know that one of the callings of God on my life is to take care of people, and part of that involved me being that behind-the-scenes person at JBU,” she said.

Aside from the grounds, there are other workers operating outside the public eye to maintain JBU. Javier Aguilar, events specialist for JBU’s facilities services, and his team are the people making public events possible. From parties to conferences, Aguilar is behind the practical tasks of setting up chairs and tables, cleaning the rooms after the events and working with the custodial supervisors to ensure the facilities are ready for people to come.

Organizing this sort of thing may sound easy on its head, but is actually far more complex, as events often overlap and fall directly after one another. Coordinating all the setup and breakdown of every event that occurs on campus is a job that carries a lot of pressure. “If we don’t stay on top of events, it doesn’t matter if the events [coordinator] people send us requests,” Aguilar said. “If we don’t do our part, it’s not happening, so we have to be responsible. It’s our job to stay on top of things.”

Aguilar, like Chaney, views his job as part of a greater calling. His job is a way of respecting people and honoring God. “My part, what I do, it’s very important if I do it well, if I take responsibility. Most of it is thinking about serving everybody. It’s not just students, it’s not just faculty; it’s everybody. Everybody is important.”

“Every event is important. If it’s a little one [with] three or four tables, or if it’s a big one with 50,” Aguilar said. “We really pay good attention, because everybody deserves that event to go well, but most importantly, it’s reflecting on what God has brought us here to do, to be servants and to honor Him in what we do.”