As senior year approaches for some students, end-of-the-year projects go from idea to reality. Those majoring in art present their four-year portfolios, business majors give their final presentations and education majors go into schools for student teaching.

This is the time when students’ hard work is highlighted, as they showcase their knowledge and what learned in almost four years.

Before any production could begin, Wilkinson pitched his film idea to the head of the art department. After his idea was approved, he sought advice from his closest friends to help with writing and planning the project.

“The story evolved into something so much bigger than I ever anticipated,” Wilkinson said. “It’s about a fan fiction writer who runs into this protesting girl named Jack and discovers things about himself through the time they spend together.”

But no matter how brilliant the idea, the film would be impossible to pull off without the support of Wilkinson’s loyal cast and crew.

Ashley Duckworth, junior digital cinema major, plays the role of Jack in the film. She has been a close friend of Wilkinson since coming to the university and even more so while playing an intricate role in developing the character of Jack.

While this is Duckworth’s first major role, she has felt tremendous support from Wilkinson as her director and as her friend.

“He has such a great personality to be a leader,” Duckworth said. “He is not overaggressive or passive and really cares about everyone, which makes him the perfect director.”

John Lauderdale, senior digital cinema major, has been friends with Wilkinson since high school and has worked on-set with him on numerous films.

Wilkinson utilized Lauderdale’s writing abilities early and the two worked together to create the screenplay, Save the Phoenix.

“This story is a blend of both of our styles,” Lauderdale said. “It has this sense of realism about it along with the aspects of a fantasy world.”

Every director has his own style and Wilkinson claims to be a very “chill” director. His focus is on everything from the film itself to each and every cast and crew-member on the set.

“Something admirable about Connor is that he understands his limits,” Lauderdale said . “With a project that is as big as this, he knows how important it is to have the support of us around him.”

“This film has been everything that I’ve worked for and everything that I think about,” Wilkinson said. “While I want this project to go to film festivals, I ultimately want to grow with who I am as a person and become the leader that I aspire to be.”

For most seniors, the final project brings a sense of fear along with it. However, Wilkinson feels he has no reason to be afraid.

“I’ve learned through this process that as long as you have the right people around you and if you are willing to be there for them, everything will be fine,” he said. 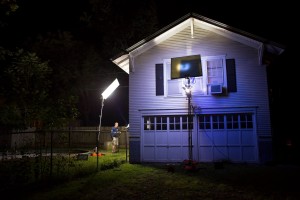 One set location for Wilkinson’s senior project, Save the Phoenix.