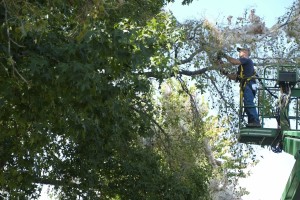 There has been an increase in webbing on the ends of tree branches this fall. Inside these web tents are caterpillars, commonly known as webworms, devouring leaves.

“They’re an embarrassment,” Chaney said about the web tents.

Despite their appearance, webworms never cause lasting damage to trees unless the trees are already very weak, Chaney said. Even if the webworms completely defoliate a tree, it would only be a few weeks before the tree would naturally have shed its leaves for the winter, Chaney said.

Grounds crew work study students have worked to remove the webs by scraping them off with rakes or clipping them out of branches. Some full-time grounds workers have gone up in a lift to clip branches that are out of reach from the ground. Chaney said the removed webs and branches are then burned in a trash can behind the facilities office.

In spite of these efforts, webworms can still be spotted around campus. Chaney said there are simply too many of them for him to win the battle.

“We just don’t have the man power to get it all,” Chaney said.

Amy Smith, University biology professor, is a trained stream ecologist and has taught entomology, the study of insects, off and on for the past twelve years.

“Any time you see an increase in population numbers, it’s due to an abundance of resources and/or a shortage of biological controls,” Smith said. “Biological controls would be predators and parasites.”

Smith speculates that the flooding and heavy rain this past spring may have affected populations of predators; birds that would have been nesting at that time may have lost young. This could result in less predators for the webworms in the fall.

Chaney said he has noticed less European Starlings flocking around trees and eating the webworms this year.

Coleen Huebert, University biology professor, added that the heavy rains this spring have provided increased foliage for webworms to eat, creating an abundance of resources for them.

University web developer, Tim Stockman, and his family have experienced the worst of the campus infestation.

Stockman moved into a campus duplex with his wife and two-year-old son in July. At this time he noticed three to four branches with web tents. However, within two weeks the webworms had enveloped the entire tree. At this point, their population died down.

However, Stockman said they soon came back with a vengeance that covered the entire trunk in webbing, as well as the duplex roof and walls. Stockman said every time he opened the front door, at least ten caterpillars would fall inside the house.

“They were raining from the tree,” Stockman said. “Every time we would leave the duplex we had to use an umbrella. Otherwise we would have caterpillars all over us.”

Stockman said his wife was distraught and during the worst of the infestation did not leave the house for three days.

Campus grounds crew cut down the tree in mid-September, which would have been removed anyway once the duplexes are demolished in construction. This solved the problem, but Stockman and his wife were already planning to find a more permanent residence, and moved out two weeks later.

“I’ve decided to see this kind of like a blood moon,” Chaney said, referring to the recent total lunar eclipse and explaining that this fall’s level of webworm infestation is a natural phenomenon that is seldom seen.