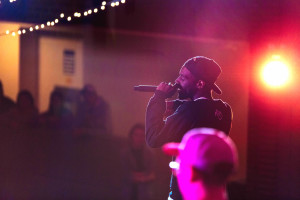 Either it was the tippity tapping of the symbols or the resounding vibrations of the bass that kept heads bobbing, bodies swaying and hands lifting at the Jasper Logan concert last Friday night. J. Alvin welcomed this up and coming rap artist who is originally from Chicago. Logan shared his story of becoming a rapper and the two dudes who helped make his recently released EP, Underneath the Diamonds, happen.

How did you start rapping?

I was 12 years old. My best friend’s dad rapped at our church one day, and it completely blew my mind. I didn’t know the two things existed in terms of Christian rap being a Christian and rapping.

Who is your musical inspiration?

Kanye West’s The College Dropout inspired me. It really hit home. It sonically was amazing
especially with the soul samples. His content was right after 50 cent just dropped so it was a cultural shift in hip-hop. He was the first example that you don’t have to be a hard-core gangster rap guy to make it in hiphop. Cross movement let me know that you can be really good and do Christian rap. Lecrae taught me how you can be missional when you go to places. The whole 116 movement was very missional and he ministered the gospel when he would go places.

What is your inspiration?

Life inspires me, and capturing moments is something that I try to do well. My music is all about life, family, friends and things that I’ve experienced. Stories also inspire me.

What is your musical or writing style?

Real, authentic and different. There’s a saying, “The blues is catastrophe lyrically experienced.” I want to communicate that. I talk about my parents divorce, us getting evicted and moving to the city and how those negative things affected me.

What do you want listeners to get from your music?

Hope. I want them to be inspired and say, “If he can get through it, I can too.” To not give up.

Would you want to pursue this as a career?

I would if I could keep some things. I’m about to have a baby. I want to make sure that I have enough time with her and my wife. If music doesn’t interfere with those things, then I would love to pursue it full-time. I want to make a difference in the world and peoples lives as much as I can. If I have the freedom to do that with my music, then I’m all for it.

Describe your current EP, Underneath the Diamonds.

It is my way of saying those pressures that we feel, that come from the hardships of life…create something beautiful underneath. God uses them and we have to do the work of looking past the surface and look at what’s underneath.

Favorite song on this album?

Every Night, which is the last song on the album. It just feels good, especially with piano. It has a Michael Jackson feel. It talks about where I’m at currently in hiphop and where I’d like to go. Like the last verse, I’m willing to go all out for it. 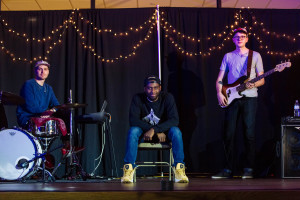 Cory Nelson (right) created most of the music and Alan Thomas (right) helped with designing and managing Logan.

Why is music so important?

Thomas: Music is one of those things that is a safe place. You can get lost in it and nothing can go wrong in that moment. It’s a universal language. Everyone speaks it to some degree. Even if you don’t know how to speak it, everyone listens to it.

Nelson: For me on the creative side, there are only so many notes. There are 13 in a chromatic octave and so many beats that everyone in the world has access to. On the creative side, you’re taking a very limited amount of building blocks and say, “Let’s see the different ways we can arrange those things.” I’m making songs that never existed before with the same tools that everyone has.

To hear Logan’s new album, get the album on iTunes or listen on Spotify.