“Why would we listen when American churches scuff their Toms on our brothers’ dead bodies as they march to stop gay marriage?”

These words, in Lecrae’s song “Gangland,” spoken by Christian rapper, Propaganda, depict the pent-up frustration of the black community with the attitude of the American church toward racial injustice in our country. The words are bold, controversial and unapologetic—and I fully agree with them.

When the topic of racial injustice—specifically the Black Lives Matter movement—is brought up among my mostly white Christian friends, I’ve noticed that it’s often met with contempt. The common retort is that it’s a race complaining about something that isn’t really a problem. As Christians, it is appalling that we would ever feel inclined to respond this way.

The common argument used to back up this claim is that there is proportionately more black crime—specifically violent crime—than crime in other races. While this is true, there are plenty of things wrong with the assumptions behind this statement. 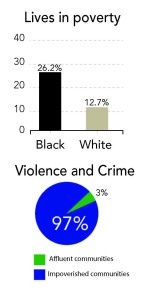 People who make this claim are only skimming the surface of the issue. The latest study released by the Census Bureau, shows that 26.2 percent of blacks in the United States live in poverty, which is more than any other race. In comparison, only 12.7 percent of whites live in poverty. Impoverished communities are 97 percent more likely to experience higher rates of violent crime than affluent communities—most often at an increase of over 25 percent, according to SAGE Publications. The issue is not merely one of crime, but also of historical segregation and oppression.

The statistics go beyond crime and poverty. Black college graduates within our borders are only half as likely to get a job out of college as whites, according to the Center for Economic and Policy Research. In our court system, black minors are 18 times more likely to be tried as adults than whites, according to American Psychological Society. Anywhere you look, statistics highlight systemic racism in our country.

Black Lives Matter is indeed a valid movement. But even with the proven validity of racial injustice toward the black community, we as Christians still overlook the obvious.

So why are we not the first to respond in love?

The inconsistency of love within the body of Christ is simply amazing at times. On some issues, we as

Christians are able to look past disagreements and simply care for people. But on others, we are far more concerned about being right than doing what God has called us to do—love our neighbor.

At the last supper in John 13, Jesus said to his disciples, “As I have loved you, you must love one another.” There are no disclaimers in this commandment—whether or not we agree with someone, we are called to love. Jesus was the most gracious to tax collectors and adulterers.  Who are we to say we can’t show compassion to someone who is in pain merely because we disagree with their views?

I’m not condoning the actions of every member of Black Lives Matter. It’s undoubtedly wrong that some of its members call for police executions, to interrupt presidential rallies and loot businesses. But it’s also just as wrong for Christians to be more concerned about being right while countless Americans continue to suffer from centuries of oppression.

As followers of Christ, we must love recklessly. That means understanding why people hurt and comforting them in their time of need. Maybe if we listened more than we argued,  problems would actually start to get solved.

Now is the time to listen, to love and to serve. There are people who need it.

Bryan is a senior majoring in communication. He can be reached at BryanM@jbu.edu.