Once again, Valentine’s Day has arrived. It is not only a day for chocolate, flowers and teddy bears but also for super awkward dinners.

J. Alvin and Mayfield are set to host their annual Valentine’s Banquet on Friday, Feb. 12 at 6 p.m. Some students look forward to the event, while others recall interesting memories.

Last year, the girls gathered in the Mayfield lobby in pairs. They were given a Disney princess and were told to find the corresponding prince, while a pair of J. Alvin men looked for the matching princess. Once the matches found each other, the guys offered the girls roses and escorted them to the J. Alvin atrium. 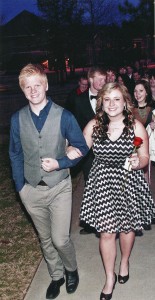 Sometimes, however, the matches didn’t find each other. Other times, there were simply no matches to be found.

“There weren’t enough guys for girls,” Janelle Hale, junior family and human services major,  said. “My partner and I were walking around looking for Simba for 5-10 minutes, and we never found him so we went by ourselves.”

Christian Smith, junior construction management major, agreed that the matching system could have been better.

“It was tricky because some people didn’t have a match,” Smith said.

He described this process as “systematic awkwardness” and added “guys doing date things with girls is always going to be awkward to a degree.”

There was a live band playing in the atrium as students entered and sat at long tables. The host for the night tried to create a fun atmosphere.

“He had this big, frilly red man blouse and he would periodically get up and tell really corny love jokes,” Smith said. “I don’t know if anyone else thought it was funny, but I did.”

Molly Devine, senior intercultural studies major, remembers sitting at the table closest to the buffet because her date was eager to be first in line.

“After we ate dinner he looked across the room and was like, ‘man we should have sat over there because that’s closer to the dessert table,’” Devine said. “In a nutshell, you look pretty, you sit with awkward friends and you eat food.” 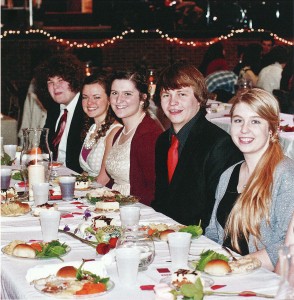 The moral of the story? “Sit strategically,” Devine said.

This year, students can look forward to a better pairing system, more interactive games and a planned before and after program.

No matter how uncomfortable the dinner may be, one fact remains: the banquet is an expression of J. Alvin’s love for Mayfield.

“We try to make the event special for the ladies of Mayfield. It’s worth it,” Smith said.

And if games, frilly blouses and food are not intriguing to the ladies of Mayfield, J. Alvin’s sincere expression of love should be a good enough reason to attend.