Morency is well-known on the Golden Eagles for her extraordinary skills on the field; however, it was difficult to achieve those skills She said that it took her many years of practice and commitment to grow in the game.

“I started playing when I was four years old and have been playing goalkeeper since age nine,” Morency said.

Morency’s skills are not the only characteristics that make her unique—she also has a bright personality. Hannah Poor, Forward, describes Morency as an outgoing person who knows when to have fun and when to be serious. She also expressed that Morency is a good leader for the team.

“She is the captain of our team, which means she has a lot of leadership roles,” Poor said. “She leads a lot of practices when coaches are not there. She has to keep everyone doing what we are supposed to be doing.”

Morency has experienced memorable experiences during her time at the University. She said that some of those experiences were her team winning the conference championship game with penalty kicks and traveling to California for Nationals in 2013.

Morency has also created a strong bond with the team. Annika Bos, defender, said that Kristen embodies what the University program is about.

“Everyone on the team respects and loves Kristen, and our team would not be complete without her,” Bos said.

This is not to say that Morency has not experienced hardships in her time at the University. Last season, Morency hurt herself in her first regular season game.

“We were playing a team down in Mississippi and I ended up breaking my collarbone,” Morency said.

Morency was unable to quickly recover from her injury. She decided to redshirt the season and come back the next fall. Morency expressed that dealing with the injury—both physically and emotionally—was the toughest challenge of the semester.

However, she also said that this injury helped her to experience more of who Jesus is.

Morency is passionate about soccer

and glorifies God through it.

“Over the last summer, she spent time in Brazil doing mission work,” Poor said. “She played soccer for a semi-pro team and she went to camps for young children. She was able to spread the Gospel to the children as she played soccer with this team.”

Morency will graduate this fall. She said she will continue looking for opportunities to keep playing and she will work as hard as she can to make it happen. She also wants to earn a master’s degree in the future.

“I plan to pursue a master’s degree in Athletic Training and continue working with soccer players who are dealing with an injury,” Morency said, “I have a passion for the game and a passion for athletes. And having experienced a season ending injury can only help me to help them.” 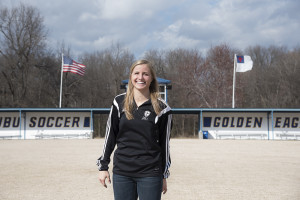