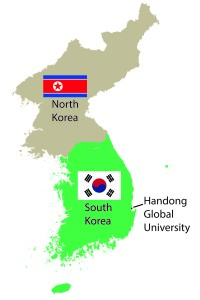 Handong University is located in Pohang, South Korea. The program has partnerships with universities all over the world, including institutions such as Biola University and Lithuania Christian College.

President Pollard’s address explained several similarities between John Brown University and Handong Global  University. “We share, as institutions, a commitment to follow Jesus Christ in all that we do, a commitment to serve the Church interdenominationally, we have a commitment to integrate faith and learning in all aspects of education and to train leaders to change the world by honoring God and serving others,” he said.

Like John Brown University, Handong Global University is an interdenominational school.
Handong University’s mission statement reflects this goal, with a promise to pursue  “academic excellence and whole-person education based on Christian faith to nurture global leaders who can change the world.”

Ted Song, assistant professor of engineering at John Brown University, was instrumental in ensuring this agreement. According to a University press release, Song travelled to Handong University last July and started the conversation between the two schools.

Steps have been taken to enact a student exchange program to start as early as fall 2016.

Pollard said that the University hopes to attract more Korean students, and is reaching out to the Korean population in Dallas, Texas. “In part because of Ted Song’s contacts in Dallas, Texas, we wanted to reach out to the 120,000 Korean-Americans there,” Pollard said. “One of the places many of these students wish to go is Handong University.”

“We thought it would be wonderful if, for those students wishing to attend John Brown, they were also able to attend Handong, and that’s how it started,” Pollard said. “My hope is that we can better understand one another, both the Korean students coming to North America, and North American students going to Korea.”

“Handong Global University is a leading Christian institutionin Asia and has been making incredible impact all over the world,” Song said in a press release. “I believe this partnership will enable alumni to be a bridge between these two nations that have been historically great partners in serving God.”