Trump is ruining my faith in Christianity. The short response to the statement is that people are supporting him (I’m not even going to say his name anymore. I can’t handle it, so I’ll give him the Voldemort treatment). I’m talking about good, Christian, God-fearing people. Don’t get me wrong, I love these people; they are my family, my friends, friends of my family and family of my friends, which is precisely why it absolutely breaks my heart to see them supporting “He Who is Not to be Named.”

As a good, Christian, God-fearing man myself, I feel obliged to do everything that I can to utterly and completely destroy even the slightest possibility that this guy has at winning anything, which, realistically, is not in my power. However, it is not in my nature to outright challenge people in their political beliefs by telling them that they are flat-out wrong for supporting this poor, cowardly man.

Among the people whom I have relationships with that support him, the most common question that I get regarding my disdain for the bigot is, “Why do you dislike this guy so much?” Well, firstly, I would like to say that my contempt is not aimed at him; however, it is aimed at basically everything that he stands for and perpetuates. I could not care less about Mr. _____ because he is a small man. What I do care about is love and furthering the Kingdom of God through loving means.

So, in response to the question of my disgust for this particular human being, I dislike his values because his values seemingly begin and end with one thing: fear. Fear is absolutely not worth alienating anyone: not Blacks, not Muslims, not the Chinese, not anyone. We are called by Christ to love God and one another above all else. Christ tells us to “love thy neighbor as thyself,” not just to love white Christians as ourselves. 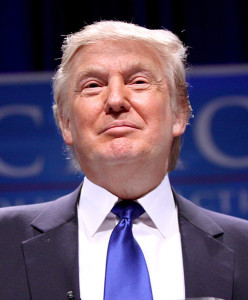 Mr. Voldemort has had numerous opportunities to shoot down, condemn and correct blatantly racist and wrong statements. However, he has not once taken the opportunity to do so. For example, while attending a rally in New Hampshire, Mr. _____ opened the floor for questions and, sure enough, the first question was a great opportunity for him to do something right, but did he? Of course not. According to a CNN report written by Theodore Schleifer, the question went like this:

“We have a problem in this country. It’s called Muslims…You know our current president is one. You know he’s not even an American…Anyway, we have training camps growing where they want to kill us…That’s my question: When can we get rid of them?”

From this report, he had two opportunities to correct the horrifically misguided questioner, yet he did not take advantage of either. Firstly, he should have correctly stated that President Obama is not a Muslim, but that he is a professing Christian. Next, he should have corrected the questioner in saying that, yes, President Obama is, in fact, an American. And the last thing
Mr. _____ passed on is the opportunity to say something along the lines of, “Please leave, I do not want your endorsement because it is inherently wrong.”

Instead, Lord Voldemort chuckled (this guy seriously laughed at how racist and misguided of an assertion it was instead of correcting it. How are people still supporting him?) and made light of the situation. I don’t know about you, but, to me, that comes across as completely cowardly. This guy is notorious for offending large groups of people, but when confronted with a blatantly wrong assertion from a racist white guy, he doesn’t have the guts to correct it.

Jones is a freshman majoring in communication. He can be reached at JonesGra@jbu.edu.