On a sunny weekend afternoon downtown, the Siloam Springs Skate Park is full of local skateboarders, flying up and down ramps or perfecting their latest tricks. It is not uncommon to spot a John Brown University student or two among the local skaters who are just as passionate about the sport.

Josh Campbell, senior graphic design major, is one such student. Before he got into skating he traveled to various races for downhill mountain biking, but said it was a long way to travel from Siloam Springs. Campbell picked up skating because it was something he could pursue locally and now rides a custom built pro-model scooter at the skate park and also enjoys longboarding around campus.

Campbell had the idea to use his new-found passion for skating as a way to intentionally connect with the local community. Two years ago he founded Skate Park Ministry, which he said is “not a traditional CAUSE ministry.”

“The reason I started it is because I would go down there and I saw this need for a positive example,” Campbell said, explain that many of the skaters are high school-aged.

There are no set times that the group meets. The group of 8-10 University skaters uses a Facebook Messenger group to stay connected and to communicate about they’re headed to the park.

“Every week there’s at least one person down there,” Campbell said. 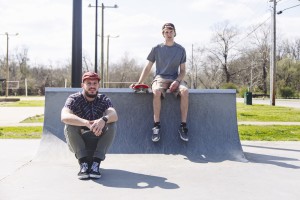 Campbell said that as a skater he automatically has a common interest with the people at the park, and he enjoys interacting with people there that he otherwise wouldn’t see.

“You have to build a relationship with them and then you just kind of have to wait for them to ask the questions,” Campbell said. “We’re not trying to be obvious about it.”

Jonathan Coon, freshman outdoor leadership major, is a local and has been skating in the area for years. He said he was not aware that the Facebook Messenger group he is a part of is related to Skate Park Ministry, or even that the ministry exists.

“I always just thought it was a group of guys that wanted to go skate. I never knew that there was a ministry intention,” Coon said. He said that instead, he sees his whole life as a ministry.

“I don’t think there’s a such thing as a secular versus a holy job,” Coon said. “Because you’re a Christian, you have the opportunity to share Christ. You shouldn’t segment your life.”

“I don’t go out and tell the skaters I’m a Christian. They’ve asked me this, just by the way I act,” Coon said. “I don’t do the drugs, I don’t smoke, I don’t drink on the weekends like they do, and they notice that about you.”

“We are the salt and light of the earth,” Coon said, referencing Matthew 5:13-14. “I’ve witnessed that first-hand, how we can literally change the atmosphere without saying a word, just by the way we carry ourselves and the way that the Holy Spirit works around us.”

Aaron Roper, a local from the skate park who has been skating for 11 years, whizzed from ramp to ramp on a Saturday afternoon, his curly blonde ponytail flying out behind him. Roper said he has known several University students from the skate park for two years.

“They’re rad as f—,” Roper said of the University skaters with a smile. “I’m friends with them. I like them a lot.”

Roper recalled a particular time when the skaters from the University had surprised him.

“It was early in January, and I was out on the streets. I was still getting by,” Roper said, explaining that his skate shoes were falling apart. “I guess they all noticed, and they all pitched in and bought me a new pair of skate shoes. Nice ones.”

“That was really cool, and unexpected,” said Roper. “They said the reason is they think I’m a cool person.”

Grant Willbanks, junior graphic design major, was a part of the group that presented the shoes to Aaron.

“It was so great. He said nobody has ever done that for him,” said Willbanks. “His positive attitude really encourages me. Aaron is the man.”